Playing his last match of season before heading home for World Cup preparations, David Warner struck a belligerent 81 off 56 balls with seven fours and two sixes to complete his IPL 2019 campaign with 692 runs, the highest so far in the tournament.

Chasing the imposing total, K L Rahul (79 off 56, 4x4s, 5x6s) made a valiant effort with the bat but lacked support from the other end as Kings XI were restricted to 167 for eight.

By virtue of this win, Sunrisers have consolidated their fourth position in the table with 12 points from 12 games, while Kings XI are at 10 points from as many matches. Both the teams have two more matches to go with Kings XI still in the hunt.

In chase of a formidable target of 213, Kings XI Punjab‘s Chris Gayle did start off with a bang crashing Khaleel Ahmed for a four behind square, but the left-arm quick had the last laugh when he had Gayle mistime one outside off and the skier was taken with a juggling act by Manish Pandey.

However, KXIP rode on KL Rahul‘s 26 off 24 balls and Mayank Agarwal‘s 11 off nine balls as they posted 44/1 runs in the powerplay overs. Rahul hit a six off Khaleel and a four off Sandeep Sharma. Mayanak helped himself to one four off Bhuvneshwar.

Despite taking the big wicket of Gayle, Khaleel was expensive in his two overs, while Bhuvneshwar’s two were hit for just 10 runs. Sandeep was taken for 13 runs in his solitary over so far while Rashid Khan completed the Powerplay overs with a 4 run-over. (SRH vs KXIP: SCORECARD)

But just when the partnership was looking threatening, Agarwal was holed by Vijay Shankar off Rashid Khan (3/21) in the ninth over.

New man in Nicholas Pooran (21 off 10) played a short breezy knock before Bhuvneshwar Kumar took a beautiful catch at long-leg boundary off Ahmed to sent packing the batsman.

Rashid then came to the party and picked up two wickets — David Miller (11 off 11) and skipper Ravichandran Ashwin — in consecutive balls in the 13th over to stand in chance of registering a hat-trick which didn’t materialise.

From there on, the asking was tall for Rahul and debutant Prabhsimran Singh (16) and the former finally perished in the 19th over after a beautiful knock to shut the doors for Kings XI.

Earlier, Warner and new his new opening partner Wriddhiman Saha combined to scored 77 runs in the first six over, and then in association with Manish Pandey, Warner added 82 runs in under ten overs, to put SRH in a formidable position. Bur Warner’s departure, in the 16th over, taken by KXIP skipper Ravichandran Ashwin, dented SRH as they the visitors reined things in a bit in the death overs. SRH managed to score 53 runs in the last five overs, losing five wickets in the process

For KXIP, Ashwin picked two wickets in an over removing Pandey for 36 off 25 balls and then Warner, caught by Mujeeb ur Rahman. Murugan Ashwin returned 4-0-32-1. Mujeeb leaked 66 runs in his four overs. 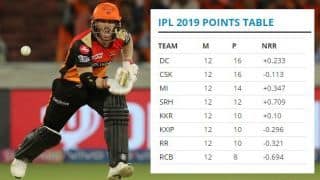