Sri Lanka have beaten Bangladesh by 26 runs (D/L) in the second semi-final of the ACC Under-19 Asia Cup 2016 and have qualified to the final, where they will take on India on Friday. Sri Lanka were set a target of 195 to win after Bangladesh were bundled out for just 194 inside 49 overs. Sri Lanka made a good start to their run chase. Their opening pair of Reven Kelly and wicketkeeper-batsman Vishva Chathuranga put on 74 for the first wicket, but it came off 119 deliveries. Kelly was dismissed for 23 by Nayeem Hasan. His wicket however did not stop his partner Chathuranga from getting a fifty.

Chathuranga scored a crucial fifty, but was dismissed for a 77-ball 68 to give Nayeem his second wicket of the match. Sri Lanka did not go at a blistering pace, but were content with keeping their wickets intact. Hasitha Boyagoda and skipper Kamindi Mendis seem to have done just about enough to ensure they finished above the D/L par score before rain stopped play. Sri Lanka were 106 for 2 in 27.1 overs before rain played spoilsport. Earlier, Sri Lankan bowlers led by left-arm spinners Praveen Jayawickrama and Hareen Weerasingha shared seven wickets between them ensured Bangladesh were bundled out for under 200.

Everyone in the top six from the Bangladesh batting unit got starts, but could not converted it into anything substantial. However, it Rayan Rahman, who top-scored for Bangladesh with 38. Bangladesh s star player in the tournament Afif Hossain scored 36. Mohammad Rakib and Afif put on 48 for the fifth wicket, which was the highest stand of the innings. Bangladesh had won the toss and decided to bat first. 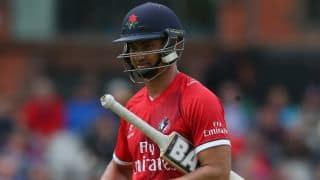