Having made first use of the Premadasa surface, New Zealand failed to flex their muscles against a tidy Sri Lankan attack. As against England in the quarter-finals, the home spinners weren t menacing but managed to keep matters in control, with only Scott Styris crossing fifty for New Zealand. 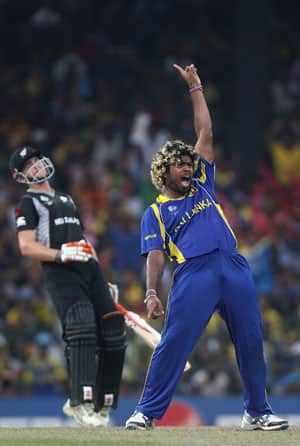 Having made first use of the Premadasa surface, New Zealand failed to flex their muscles against a tidy Sri Lankan attack. As against England in the quarter-finals, the home spinners weren t menacing but managed to keep matters in control, with only Scott Styris crossing fifty for New Zealand. Just when a pair appeared set to forge a big partnership, Sri Lanka would nip out a wicket and thus an engaging game of cat and mouse played until the start of the 40th over, at which point Sri Lanka took control. From 192 for four in the 43rd over, New Zealand folded spectacularly for 217 in 48.5.

When Daniel Vettori won the toss and opted to bat, it seemed as though the stage could be set for New Zealand to make all the right noises. The fall of Brendon McCullum, bowled by Rangana Herath in the eighth over with 32 on the board, was a cause for concern. Jesse Ryder and Martin Guptill set about laying a base, only for Ryder to edge an attempted cut off a hobbling Muttiah Muralitharan. Soon after, Lasith Malinga came back into the attack and thudded a yorker into the base of Guptill s stumps.

Styris joined Ross Taylor and the two applied the pressure on Sri Lanka. Although 84 for three was a tricky spot for New Zealand to be in, Styris and Taylor batted with a sureness missing in the opening pair. Taylor spent some time getting his eye in, sizing up the bounce and spin the pitch was affording Sri Lanka s spinners. Styris was busier and did not allow the spinners to settle against him, shuffling and cutting and sweeping the ball along the ground. He also hit Malinga out of the attack, driving handsomely past cover and midwicket.

When 77 had been added for the fourth wicket, and New Zealand were threating run away with the game, they lost a wicket against the run of play. Taylor had been struggling to force the pace and when he got a short ball from Ajantha Mendis his attempt to heave it off the park ended up in a catch to deep mid-wicket.

Kane Williamson joined Styris and while there were no fireworks to begin with, Williamson sparked the batting Powerplay with some precious shots against Murali. But he was unable to counter Malinga who took him out with a full and straight delivery. Nathan McCullum followed, edging a slower ball.

New Zealand needed Styris to marshal the end overs as Williamson had done against South Africa, but Murali returned to have the final say. With his final international delivery on Sri Lankan soil, Murali sent down a fizzing off-break outside off and Styris premeditated clip to leg resulted in a loud lbw shout and an upheld verdict. At 57 Stryris was gone and New Zealand were slipping at 213 for seven.

Just three runs came from the 48th over as Jacob Oram fell to Tillakaratne Dilshan, and Mendis snuffed out the last two in the 49th over to end the innings with seven deliveries to go.