West Indies turned the screws on Sri Lanka, taking a 360-run lead with six second innings wickets in hand at the close of the third day.

West Indies turned the screws on Sri Lanka, taking a 360-run lead with six second innings wickets in hand at the close of the third day of the first Test on Friday. Continuation of the inept batting display of the previous evening, save for a 78-run fifth-wicket partnership between captain Dinesh Chandimal and wicketkeeper-batsman Niroshan Dickwella, saw the tourists lose their last six wickets for 64 runs to be dismissed for 185 at tea in reply to the home side’s formidable first innings total of 414 for eight declared.

However, home skipper Jason Holder declined to enforce the follow-on at the Queen’s Park Oval in Trinidad, giving the opportunity to Kieran Powell to compile an entertaining, unbeaten 64 as the West Indies reached stumps at 131 for four. With two days left in the match, it remains to be seen what target Holder will feel comfortable with on the fourth day and, more importantly, how much time he believes he will need to ensure his bowlers, himself included, can complete the victory to give his side an early lead in the three-match series.

Following the devastation wreaked by pacers Shannon Gabriel and Kemar Roach late on day two and at the start of day three, it was fast-medium bowler Miguel Cummins who cleaned up the Sri Lankan tail to finish with the best innings figures of three for 39. However, there can be no trivialising the damage inflicted by the two new ball bowlers, both in terms of wickets and psychologically, on batsmen who appeared almost completely incapable of coping with fast, short-pitched bowling on a sporting surface.

Yet as well as the hosts bowled on the third day, the visitors contributed to their own demise with a succession of poor shots. Already in trouble at the overnight position of 31 for three, Sri Lanka lost Roshen Silva at the start of the morning, bowled by Roach, before Chandimal and Niroshan Dickwella offered the only substantial resistance. They looked to be getting on top of the bowling heading into the lunch interval when Chandimal, on 44, set the tone for the remainder of the innings by playing a loose shot in the final over before the break off Gabriel for Roston Chase to take his third catch of the innings at backward point.

Dickwella was then run out for 31 in a mix-up with new batsman Dilruwan Perera early into the afternoon session and from that point the innings subsided swiftly. Despite the West Indies’ comfortable position at the start of the second innings, the pressure was once again on the recalled Devon Smith to deliver at the top of the order.

Run out in the first innings for just seven, he was first bowled by a no-ball from Suranga Lakmal and then bowled again by the very next delivery, this time legitimately, and departed for 20. Lahiru Kumara, who impressed with his pace and effort in taking four wickets in the first innings, enjoyed success again when he had the other opener, Kraigg Brathwaite, caught by Dickwella and removed premier middle-order batsman Shai Hope shortly after to a second slip catch by Roshen Silva.

At the other end, Powell was all impressive assurance with his stroke play, reaching the half-century mark off just 59 deliveries. By the time stumps were drawn, his 64 had occupied 80 balls in an innings embellished by two sixes and six fours. He lost Chase just before the close of play, bowled by Rangana Herath. It was hardly cause for celebration, though, in a Sri Lankan camp bracing for the challenge of batting for survival at some point on the fourth day against the likes of Gabriel and Roach on a wearing pitch. 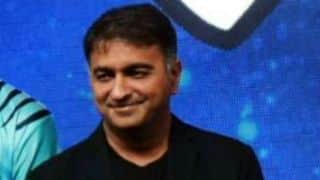