Danushka Gunathilaka and Sadeera Samarawickrama put on 154 in 27 overs at Katunayake.

Left-arm spinner Ajaz Patel boosted his chances of playing the first Test against Sri Lanka next week after he took the first five wickets to fall on day one of New Zealand‘s tour match against a Sri Lanka Board President’s XI in Katunayake, a suburb of Negombo City.

Patel, who made a stirring Test debut in 2018 but lost his place in the team once New Zealand resumed playing at home, took 5/41 off ten overs on Thursday. The SL BP XI ended on 323/6 after 65.5 overs, after an opening stand of 154 was snapped by Patel.

During the day’s play, Kane Williamson celebrated his 29th birthday with a section of Sri Lankan fans who offered him a cake from the boundary line. Williamson jogged over to them and ate a piece of cake, thanked the spectators and returned to his fielding position.

Leading the way for the home team following Ashan Priyanjan‘s decision to bat were the openers Danushka Gunathilaka and Sadeera Samarawickrama. The pair scored runs a fast clip, blunting the new-ball threat of Trent Boult and Tim Southee who each went wicketless whole conceding runs at 4.55 and 4.11 per over respectively.

The dominant opening stand was snapped by Patel off the last ball of the 27th over when he had Samarawickrama caught for 80 off 90 balls.

Five runs later, Patel dismissed Oshada Fernando when he took a return catch. The left-arm spinner made further inroads to send back Bhanuka Rajapaksa for 0 and Gunathilaka for 98 off 97 balls, feathering an edge to wicketkeeper Tom Latham. Patel’s fifth wicket came when Angelo Perera was caught by Kane Williamson for 32.

Priyanjan batted to stumps on 56. Will Somerville took the other wicket to fall, getting Pathum Nissanka for 35 after he put on 81 with Priyanjan. 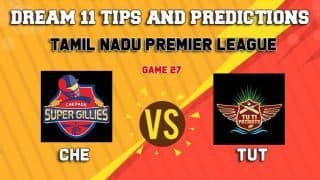