Tillakaratne Dilshan slammed his 17th One-Day International ton and Kumar Sangakkara cracked 91 as Sri Lanka thrashed South Africa by eight wickets in the fourth game to take an unassailable 3-1 lead in their five-match series at Pallekele on Sunday. 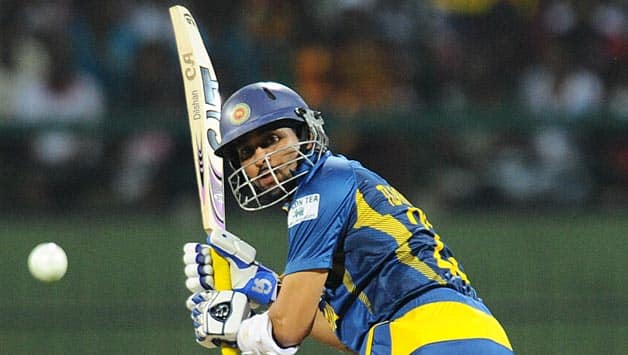 Tillakaratne Dilshan slammed his 17th One-Day International ton and Kumar Sangakkara cracked 91 as Sri Lanka thrashed South Africa by eight wickets in the fourth game to take an unassailable 3-1 lead in their five-match series at Pallekele on Sunday.

Chasing a target of 239, Sri Lanka lost only two wickets in form of Mahela Jayawardene (12) and Sangakkara to achieve the target with six overs to spare.

Dilshan remained unbeaten on 115 while Sangakkara fell short of nine runs of his 17th ODI century, as the two veteran Sri Lankan batsmen made mincemeat of the South African bowling attack.

Dilshan struck 16 boundaries to score 115 off 130 balls, while Sangakkara’s 91 came off 101 deliveries, studded with eight fours and two sixes. Sangakkara added 184 runs with Tillakaratne Dilshan for the second wicket.

Lonwabo Tsotsobe provided South Africa the first breakthrough when Hashim Amla took a sharp catch at gully to send back the former skipper Jayawardene in the 10th over of the innings. Jayawardene fell after providing the hosts a steady start with Dilshan, as they two batted cautiously to reach 40 from the first nine overs.

Sangakkara joined Dilshan in the middle and the two experienced Sri Lankan batsmen made mockery of a depleted South African bowling attack, giving no chance whatsoever to the tourists to capitalise.

The two rotated strike with ease and picked up a boundary at regular intervals to keep the asking rate in check. Dilshan found his rhythm with two boundaries off Morne Morkel in the seventh over of the run chase, and then proceeded cautiously to raise his half-century in the 27th over off 83 balls.

Earlier, Jean-Paul Duminy‘s gritty knock of 97 lifted South Africa to a competitive total of 238 all-out against Sri Lanka. Duminy slammed two sixes and seven boundaries to score 97 off 121 balls, as his innings helped South Africa recover from a collapse which once indicated that even a score in excess of 200 would be difficult to get.

South Africa had squandered their chance to put up a huge target as they slipped from 118 for one in the 23rd over to 205 for nine in 45 overs.