A premature end to Day 4 due to a combination of bad light and heavy thundershowers in Colombo would have made Sri Lanka hard done by. The hosts had South Africa frustrated with an attacking batting display and posting a near-improbable total at the venue. Rangana Hearth had the visitors in a spin after Angelo Mathews called time on Sri Lanka’s second innings.

The day started with Tharanga in full cry and the southpaw played some crisp strokes down the ground in the first hour of the day’s play to frustrate the South Africans. Dale Steyn then ended Tharanga’s cameo by inducing an edge of the toe end of his bat. Sangakkara also wasted no time in getting off the blocks and Kaushal Silva was playing one of his typical gutsy innings, lending good support to his senior partner. Silva smashed Morne Morkel for a couple of boundaries, but the lanky pacer had his revenge in the next over. Silva was outfoxed by a slow delivery and Vernon Philander took a smart catch at gully, diving forward and latching on to the looping ball.

The emperor of the Sinhalese Sports Club (SSC), Mahela Jayawardene departed soon albeit controversially. Trying a reverse sweep off Imran Tahir, the ball clipped the top part of Jayawardene’s glove and Dean Elgar made a desperate dive to take the catch, just a feet away from the batsman. After deliberating for long, Jayawardene was given his marching orders by the third umpire after the veteran batsman challenged Nigel Llong’s call. Jayawardene’s had a duck at the SSC but still got a standing ovation when he walked back to the pavilion. Sangakkara and skipper Mathews settled in and looked comfortable at the stroke of Lunch.

Apart from the excellent Morkel, who picked up his 200th Test wicket en route to his four-wicket haul, aggressive batting from the Sri Lankans meant that runs were leaking in large chunks. Sangakkara top scored with 72 with yet another innings of silk and authority from the veteran southpaw. Mathews capped off his phenomenal year with another half century and Herath’s wicket sparked off a declaration. South Africa were left to chase 369 from 128 overs in what could have been a move inspired by Hashim Amla in the first Test.

Predictably, South Africa dropped anchor and blocked out the early overs with Sri Lankan spinners probing and smelling blood. Herath induced a top edge of Alviro Petersen’s bat for a 25-ball duck. Quinton de Qock, promoted at No 3 showed no signs of nerves and kept the scoreboard ticking along before a third interruption in the day’s play forced the fielders to go back in the hut. 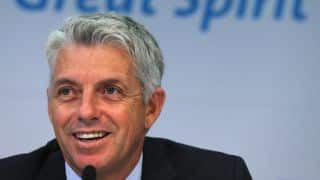 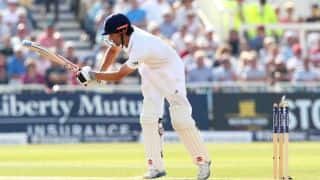