Sri Lanka mauled England by 8 wickets to win the Second One-Day International in colombo. They chased down the target of 185 set by England on a canter with more than 10 overs to spare. Sri Lanka have now consolidated their lead to two nil in the seven match ODI series.

Sri Lanka began briskly in pursuit of the below par  target of 185 set by England before Steven FInn struck for England, getting rid of Kusal Perera for nine in the 5th over of the innings. Finn who bowled with a lot of venom on a docile pitch was unlucky not to snap another couple of wickets in his opening spell. The pacer had replaced Ben Stokes for this match. At the other end Tillakaratane Dilshan looked in ominous form, before playing a shot too many in anger holding out to Chris Woakes of the bowling off Moeen Ali.

That was the final moment of joy for England in the match as Kumar Sangakkara and Mahela Jayawardena were at their vintage best.  Both scored valuable half centuries which not only helped steady the Sri Lankan innings from a tricky 41 for two but put them in complete command of the match. Jayawardena displayed his full repertoire of shots once he had passed his half century .England bowlers failed to put any pressure on the experienced duo as they rotated the strike with great ease and helped themselves to an occasional boundary. England were unable to dislodge the duo as the southpaws took Sri Lanka past the victory line with 64 balls still remaining. Sangakkara and Jayawardena constituted an unbeaten match winning partnership of 149 runs.

Earlier during the day, the match was a truncated affair, reduced to 45 overs due to the overnight rainfall. The ground staff did a stupendous job by ensuring that play got under way as quickly as it did. England opted to bat but failed gather any momentum at any stage of their innings, they remained in first gear throughout. Wickets fell with great regularity as nobody in the top order made a contribution of significance barring Joe Root who got a scratchy 42. Ravi Bopara who’s making a comeback into the side, came to their rescue yet again, scoring a timely half century which gave the English total a semblance of respectibility. England clambered to 185 before being bowled out in 43 overs.

Kumar Sangakkara kept the record books busy during the match, as he equaled the record for highest number of dismissals in One-Day cricket, joining Adam Gilchrist. He also became the Second highest scorer at the R Premadasa stadium behind sanathya Jaysuriya. 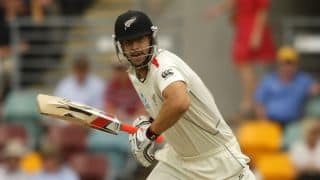