Sri Lanka need 63 to win to level the series as well as become the first Asian side to win a Test at Kensington Oval.

Sri Lanka finished on top only just after a topsy-turvy day’s cricket (day’s and night’s, technically) in the first pink-ball Test on West Indies soil, at Kensington Oval, Bridgetown, Barbados. Twenty wickets fell on a rain-affected day where only 74.2 overs of cricket was possible. Chasing 144 for a win, Sri Lanka finished Day Three on 81 for 5, and now need 63 to win to level the series as well as become the first Asian side to win a Test at Kensington Oval.

At the crease are Kusal Mendis, top-scorer in the fourth innings with 25 not out, and Dilruwan Perera. Kusal Perera, who had run into an advertising board and had to be taken away in an ambulance, is fit to bat.

If Sri Lanka win the Test, they will win the Test and do that in the absence of their suspended captain Dinesh Chandimal as well as two key players Rangana Herath and Angelo Mathews.

Sri Lanka started the day at 99 for 5, 105 behind West Indies. Roshen Silva chased a wide one after about half an hour’s cricket and edged to give Shannon Gabriel a wicket. Niroshan Dickwella took charge, flailing his bat around for a 72-ball 42 to take Sri Lanka to 147 for 7. The innings proved crucial, as their 9, 10, and 11 all fell for ducks. Captain Jason Holder finished with outstanding figures of 16-8-19-4. He also ran out Lahiru Kumara.

West Indies came out to bat 50 ahead, but ran into a rampant Suranga Lakmal almost immediately. Lakmal, standing in as captain, had Devon Smith chop on to the stumps, Kraigg Brathwaite caught at short-leg, and Roston Chase caught at slip. At the other end, Kumara bowled Shai Hope and had Kieran Powell caught-behind (the latter despite a review).

West Indies were in shambles at this stage, at 14 for 5. Shane Dowrich and Holder, saviours in the first innings, got together to add 27. Then Kasun Rajitha had Dowrich top-edging a pull, and two balls later, Devendra Bishoo bowled. Holder hung around for a while before edging Rajitha to slip. The score read 56 for 8.

Kemar Roach (23*) and Miguel Cummins (14) added a vital 26, and Gabriel helped Roach add another 11. Before that, however, Lakmal walked out with a cramp while trying to bowl his 11th over on the trot, though he returned to bowl later in the day. Dilruwan had Cummins caught at slip, while Rajitha took advantage of a mix-up to run out Gabriel from square leg. West Indies’ 93 is their lowest total at Kensington Oval.

Roach got Mahela Udawatte early, leg-before, despite a review. Danushka Gunathilaka got 21 quick runs before top-edging a pull off Holder. Then, at 48 for 2, Dhananjaya left a ball, again off Holder, that hit off-stump. Holder struck twice more before stumps, having Asela caught at slip and Dickwella bowled. 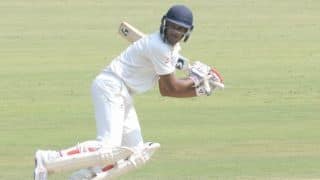