The Sri Lanka openers have managed to survive the second session without losing a single wicket as they chase a massive target set by Zimbabwe in the only Test at Colombo.

The Sri Lanka openers have managed to survive the second session without losing a single wicket as they chase a massive target set by Zimbabwe in the only Test at Colombo. Zimbabwe, powered by a magnificent century from Sikandar Raza, put up 377 in the second innings, taking a 387-run lead in the match. The Sri Lanka openers Dimuth Karunaratne and Upul Tharanga remained unbeaten till tea, putting up 56 runs on the board and kept Sri Lanka’s hopes alive. As the teams took tea, Karunaratne remained unbeaten at 30 with Tharanga at 26. Live cricket scorecard: Sri Lanka vs Zimbabwe, One-off Test

Captain Graeme Cremer continued batting along with Donald Tiripano post lunch in an attempt to gather as many runs as they can. Tiripano was dropped once during his innings when he mishit one full-length Dilruwan Perera delivery. He got out soon after for 19. This time, Perera pitched it at good length, outside off stump which Tiripano got plumb on his pads.

With a lead over 350, Zimbabwe looked in a good position but decided to bat till they were bowled out. Chris Mpofu hit an exciting six during his knock but could not do much as Cremer got dismissed a few deliveries post that, ending Zimbabwe’s innings at 377. Cremer’s 48 was another handy contribution towards the team score. Cremer gloved a good length delivery off Rangana Herath to Karunaratne at slip.

Zimbabwe went in directly with spinners, handing the ball to Sikandar Raza to open. But Sri Lanka paced up the scoring rate as the openers kept hitting boundaries in every over. Zimbabwe bowlers produced but tough chances, but nothing bore them results.

Sri Lanka have another session in hand and a day to get the runs. Their aim will be to not lose any wickets till stumps today, building a huge partnership. 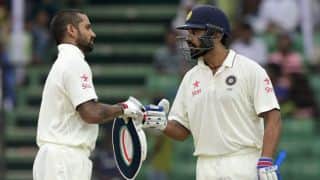 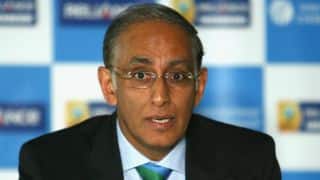 Afghanistan A to play India A, South Africa A in tri-series after Australia A opt out