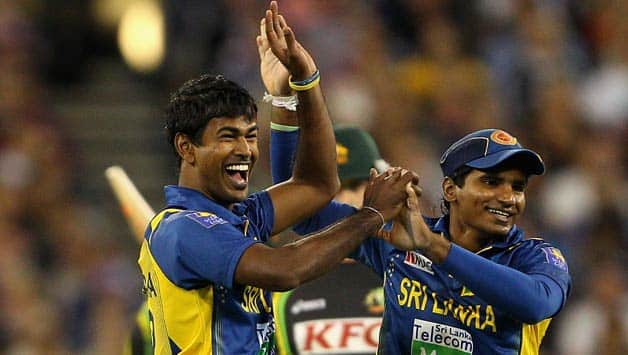 Sri Lanka won a well fought rain-marred thrllling T20 encounter by two runs against Australia, to claim the series, at Melbourne on Monday.

Needing 163 to win, Australia’s chase got off to a poor start as they lost both their openers early. They were reduced to 20 for two in 4.1 overs. However, skipper George Bailey and Shaun Marsh played sensibly to take the hosts to 60 for two in 10 overs before the match was brought to a halt due to rain.

With the scores revised, Australia were left to chase 62 runs in five overs with eight wickets in hand. Although a tough ask, Marsh and Bailey scored at a brisk pace to keep Australia in the hunt.

Earlier, Mahela Jayawardene slammed a fine unbeaten 61 and Thisara Perera‘s quickfire 35 not out helped Sri Lanka post a daunting target of 162 runs against Australia in their second Twenty20 at Melbourne on Monday.

Asked to bat first, Sri Lanka made a poor start, losing three for 39 in the seventh over, as their top order flopped against the Aussie pace attack.

Opener Tillakaratne Dilshan scored six, while Khushal Perera could manage only 15 off 17 balls before being dismissed by Glenn Maxwell.

Jayawardene and Ajantha Mendis then joined forces to take Sri Lanka ahead, adding 63 runs for the fourth wicket in more than eight overs.

Mendis scored 25 before falling to Australia spinner Xavier Dohery. His innings of 25 came from 24 balls and three boundaries.

After Mendis’s dismissal, all-rounder Perera joined the veteran batsman as the two added a quickfire partnership of 59 runs in 4.4 overs, which pushed Sri Lanka to 161 for four in their allotted 20 overs.

Man of the Match: Thisara Perera