Dinesh Chandimal scored 64 not out to help Sri Lanka beat Pakistan by two wickets in the fifth and final One-Day International (ODI) at Abu Dhabi on Friday.

Chandimal remained unbeaten on 64, which came from 70 balls, studded with a six and a four.  Early in their chase, Kusal Perera went hammer and tongs at the Pakistani bowling, his four sixes not too dissimilar to the way Sanath Jayasuriya decimated attacks in his prime.

In an attempt to put Sri Lanka of sight, Kusal was out leg before trying an audacious reverse sweep of Mohammad Hafeez in the 13th over of the game for a quickfire 47 of 40 balls with three fours and four sixes, with the team total on 75.

With that breakthrough Pakistan tried to put the brakes on the Sri Lankans. Just when Kumar Sangakkara and Tillakaratne Dilshan were patiently trying to set a platform for the Lankans, Dilshan holed out at fine leg to Saeed Ajmal off Junaid Khan; it was the 50th wicket for Junaid in the calendar year 2013.

Junaid soon sent Sangakkara’s leg stump for a walk when the Sri Lankan wicketkeeper shuffled a tad too much. Ashan Priyanjan, after playing so well in the previous match edged an Umar Gul delivery to Umar Akmal and Sri Lankans were in a spot of bother.

Chandimal, though, kept Sri Lanka in the hunt, stabilising the innings and rotating the strike although at this point the Lankans had gone more than a 100 balls without scoring a boundary.

Anwar Ali came back in the 41st over and had captain Angelo Mathews caught behind. Mathews referred it and to what seemed like a tricky call, the batsman was given his marching orders by the third umpire and Sri Lanka were reduced to 166 for five.

Kithuruwan Vithanage came in and struck a couple of timely boundaries but a doosra by Ajmal bamboozled the Sri Lankan youngster in his brief stay at the crease.

Sniffing blood, Misbah brought Junaid back and was rewarded immediately when Sachitra Senanayake hit it straight to Mohammad Hafeez at mid-wicket.

Lasith Malinga was castled by Ajmal, going for a wild heave and the score, 195 for eight. Chandimal however, dusted himself up and went for the target with the help of Ajantha Mendis.

With 18 required of the last two overs, Umar Gul’s first delivery of the penultimate over was dispatched by Chandimal for Six and Mendis, in a stroke of genius smashed  a six as well. 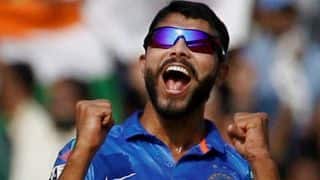 Ravindra Jadeja will be the next Wasim Akram: Joe Dawes 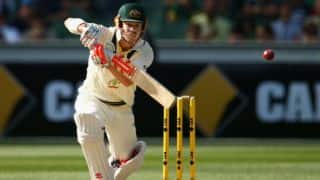