Senanayake was in the midst of a fresh controversy after 'Mankading' Jos Buttler.

Sri Lanka‘s Sachithra Senanayake found himself involved in fresh controversy as England were restricted to 219 all out in the fifth and final one-day international at Edgbaston on Tuesday.

Allowed to take part under International Cricket Council (ICC) regulations, despite being reported for a suspect action in Sri Lanka’s seven-run and 2-2 series-levelling fourth One-Day International (ODI) win at Lord’s on Saturday, the off-spinner ran out non-striker Jos Buttler for 21 on Tuesday as the batsman backed up.

Buttler, whose blistering 121 had so nearly guided England to a stunning win at Lord’s, had previously been warned by the bowler. Although the umpires are not obliged to ask the fielding captain if he wants to withdraw the appeal in such circumstances, they did so but Sri Lanka skipper Angelo Mathews was happy to let it stand.

Under an ICC playing regulation, amended in 2011 and applicable in this series, “the bowler is permitted, before releasing the ball and provided he has not completed his usual delivery swing, to attempt to run out the non-striker”.

In February 2012, Sri Lanka’s Lahiru Thirimanne was run out in similar circumstances at the Sydney Cricket Ground by India’s Ravichandran Ashwin. But on that occasion, India captain Virender Sehwag withdrew the appeal and Thirimanne batted on to make 62 and set up a Sri Lankan victory.

Senanyake, who again proved economical with the ball in taking one for 36 from his 10 overs, was roundly booed by the crowd, who considered his legitimate action in dismissing Buttler unsporting.

The debate over Buttler’s exit threatened to obscure the fact that England had batted poorly after captain Alastair Cook won the toss and opted to take first use of the pitch despite the overcast conditions.

Left-handed opener Cook top-scored with 56 in an innings where the only other batsmen to get out of the 20s were Ian Bell (37) and Chris Jordan (30).

England twice went seven overs without a boundary as they struggled against Sri Lanka’s spinners while paceman Lasith Malinga (three for 50) took wickets at both ends of the innings as the hosts were dismissed with 11 balls still remaining.

Opener Bell, on his Warwickshire home ground, was dropped on 18 but not long afterwards chipped a tame return catch to spinner Ajantha Mendis, although the ball did appear to ‘stop’ in the pitch.

It was a similar story when Malinga caught and bowled Gary Ballance. But the pitch could not be blamed for the fall of England’s next two wickets. Joe Root was caught behind by Kumar Sangakkara off spinner Ashan Priyanjan after gloving an intended reverse sweep. Cook, who faced 85 balls and struck three fours, then saw a paddle sweep off Senanayake lob gently to wicketkeeper Sangakkara.

Jordan offered some resistance before he was run out but rain during the mid-innings break threatened to alter Sri Lanka’s victory target. 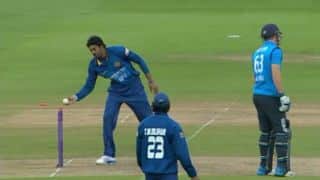 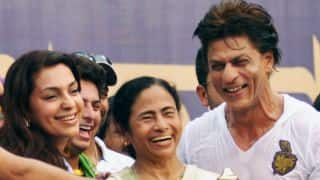