Sri Lanka’s captain Angelo Mathews is not a happy man after their three-wicket defeat to Australia in the first One-Day International (ODI) match. Mathews felt the dismissal of the middle-order batsmen between the 30-33rd over turned around the game for the hosts and was major reason for their loss. Mathews himself was target during that time frame where he was brilliantly caught at backward point. Soon after Mitchell Starc claimed his second wicket of Dhananjaya de Silva, he relished the record of fastest bowler to reach 100 ODI wickets. Having been 124 for 2, Sri Lanka slipped to 132 for 5, and the innings never really recovered. FULL CRICKET SCORECARD: Sri Lanka vs Australia, 1st ODI at Colombo (RPS)

Speaking to ESPNcricinfo.com, Mathews said, “We were going pretty well at one point. But straight after Kusal Mendis got out, I got out, and then Dhananjaya got out. I thought that was a bit of a turning point. We needed a partnership with Dinesh Chandimal. Either me or Dhananjaya had to set it up for Thisara Perera and Milinda Siriwardana to go out there in the 43rd or 44th over and get those quick runs. It wasn’t easy to get quick runs. The boundaries were 80 or 85 yards away. We needed to be scrappy, but unfortunately we were short 20 or 30 runs.”

The dry state of pitches has been a cause of mild controversy so far in this Australia tour, and the Khettarama surface for this match was criticised – both by Aaron Finch, who labeled it a “poor pitch”, but also by Mathews, who delivered a milder censure. Speaking about the pitches, Mathews said, “The pitch was a bit too dry I thought. It was hard work for the batters. It was stopping and gripping for the seamers’ slower ones, and it was turning square. With this kind of weather we knew it was going to turn, but it was a bit too dry. It’s that type of wicket that Australia’s seamers will also come into play with their variations.” ALSO READ: SL vs AUS, 1st ODI: Starc’s 100-wicket milestone and other highlights

If there was anyone who was relishing on these pitches was new comer and left-arm spinner Amilo Aponso, who spun several deliveries so sharply it wound up in the hands of Mathews at slip. He finished with figures of 1 for 27 from his 10 overs. He was by a distance the most economical Sri Lanka bowler. Mathews was impressed by Aponso and said, “I thought Amila bowled the best out of the lot,” said Mathews, who used five slow bowlers in the match. “Dilruwan Perera was steady, but the way Amila bowled was fantastic. This is actually the first time I’m seeing him. He bowled extremely well and I’m very pleased.”

Mathews felt Finch had set the base for Australia and added, “He got a lot of runs against the new ball, and that would have been his plan, because when the ball gets a bit older – after 10 overs – it is not easy on this track. With the fielding restrictions and two men out of the ring, he scored quickly and fearlessly against our spinners.” 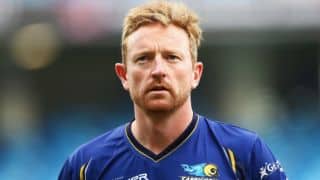