Bopara was bowled by Tillakaratne Dilshan.

Ravi Bopara was bowled by Tillakaratne Dilshan in the fourth One-Day International (ODI) between England and Sri Lanka at Colombo on Sunday. Jos Buttler was the new batsman, who came in to join Eoin Morgan.

Earlier, James Taylor was dismissed for a career-best 90. After batting very well, he started getting cramps which could have contributed to his wicket. He tried to go over the top of covers off Ajantha Mendis but was caught. Joe Root was bowled by Rangana Herath. Having scored an attractive 36 off 49 balls, Root was beaten for pace by the wily spin of Herath. Alex Hales was out for a first-ball duck. Dhammika Prasad took the wicket, as Hales’ attempted drive found the outside edge to Mahela Jayawardene at slip. Moeen Ali could only manage 19 runs, though he was batting well. Moeen was drawn out of the crease by Tillakaratne Dilshan and beaten. He edged behind to Kumar Sangakkara, who also had the stumps out in a flash. 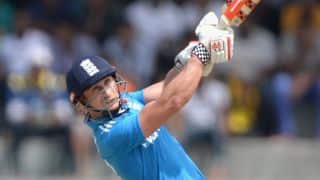 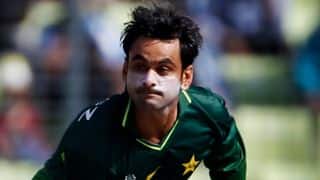