Currently Joe Root and Chris Woakes are batting on the crease.

England’s wicketkeeper-batsman, Jos Buttler was dismissed for 23 against Sri Lanka during the seventh and final ODI at the R Premdasa Stadium in Colombo on Tuesday. He was dismissed off Seekkuge Prasanna after 23 deliveries and was caught by Dinesh Chandimal. Currently Joe Root and Chris Woakes are batting on the crease. England are still 166 runs short off the target.

Earlier during the day, Sri Lanka skipper, Angelo Mathews won the toss and elected to bat first.Piling on Dilshan’s brilliant century, Sri Lanka set a target of 303 for England to win this final encounter with Sri Lanka having an unassailable 4-2 lead in the series. 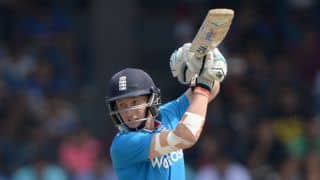