Eoin Morgan s England are a win away from wrapping up the series with a game to spare, and given how poor Sri Lanka have been so far in this rain-hit contest it is the visitors who are square favourites in Saturday s fourth ODI at Pallekele.

Should they beat Sri Lanka to claim the series, it will be England s ninth consecutive bilateral ODI series win (discounting the one-off ODI versus Scotland in June). Since they were beaten by India in January 2017, Morgan s team has won series over West Indies (twice), Ireland, South Africa, Australia (twice), New Zealand and India and now lead Sri Lanka 2-0.

Both of England s wins on tour have been highlighted by clinical batting efforts from central figures, which has been the difference between both sides amid the rain interruptions. In the second ODI, Joe Root and Morgan hit brisk fifties in a Duckworth/Lewis method win, and in the third game, which was reduced to 21-overs-per-side, it was again Morgan who steered the chase with Jason Roy and Ben Stokes hitting key cameos.

In comparison, Sri Lanka s batting has been poor. In the second ODI they found themselves 31/4 chasing 172 in 29 overs and in the last ODI, Niroshan Dickwella, Sadeera Samarawickrama and Dinesh Chandimal made contrasting scores in the thirties while Kusal Mendis and Thisara Perera bagged ducks. No batsmen has managed a fifty yet.

The hosts have chopped and changed to no avail. Mendis slotted back into the XI after being a late replacement for Kusal Perera and bagged his third ODI duck in a row after two blobs in the Asia Cup, which saw him dropped for this series. Still, given the absence of options, he should get another game.

A successful comeback for Tom Curran in the last ODI has heightened chances of his younger brother Sam getting a game to put the siblings together for the first time in England colours. In that scenario, Ollie Stone would sit out. Joe Denly has also landed in Kandy but is unlikely to get chance to play his first ODI since 2009.

– Mendis has now gone 22 innings without an ODI fifty, dating back to June 2017 during which time he has seven ducks.

– England have hit 14 sixes in the series as compared to six by Sri Lanka.

In the last couple of matches we didn’t get a big partnership from the top order. That’s been happening for a while. When the top order scores, the middle order fails and vice versa. To get the optimal score, we need to click together.” – Niroshan Dickwella

We bowled exceptionally well as a team. It came out nicely, I’ve been practising hard in the nets, and I’ve got a simple game plan.” – Adil Rashid 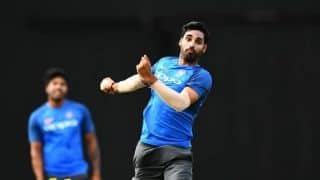