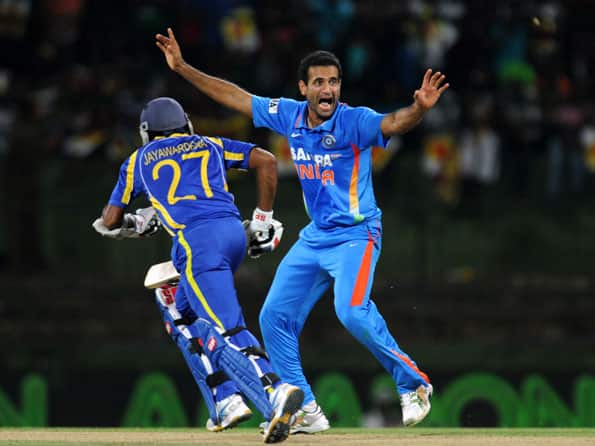 Statistical highlights of the lone Twenty20 match between India and Sri Lanka at Pallekele on Tuesday.

# Irfan Pathan has been adjudged the Man-of-the-Match for the second time in T20Is – his first award was against Pakistan for claiming 3 for 16 at Johannesburg on September 24, 2007.

# Pathan captured the wickets of the top three batsmen for the first time in a T20I.

# Virat Kohli and Ajinkya Rahane have shared a partnership of 74 for the second wicket – India’s highest against Sri Lanka in T20Is.

# Ashok Dinda (4/19) has registered his best bowling figures in T20Is.

# Dinda is the first Indian bowler to take four wickets in an innings against Sri Lanka in T20Is.

# Dinda’s aforesaid figures are the joint second best for India in T20Is. Zaheer Khan had taken four wickets for 19 runs against Ireland at Trent Bridge on June 10, 2009.

# Rudra Pratap Singh holds an Indian record. He had bagged 4 for 13 against South Africa at Durban on September 20, 2007, which are the best by an Indian bowler in T20Is.

# Dilshan has posted his first duck against India – his fourth in T20Is.

# Mahela Jayawardene (26) has recorded his highest score against India in T20Is.

# India’s convincing 39-run victory is their biggest by runs’ margin, outstripping the 37-run win against South Africa at Kingsmead, Durban on September 20, 2007.

# Sri Lanka, after winning the first two games against Australia, have lost their first match at Pallekele.

# Shaminda Eranga became the first bowler to take a wicket each in his first over in Tests, ODIs and T20Is.

# Kohli has become the first Indian batsman to record a fifty against Sri Lanka in Sri Lanka.

# Kohli’s above knock is the highest by an Indian player against Sri Lanka in T20Is, surpassing Virender Sehwag’s 64 at Mohali on December 12, 2009.

# Dhoni, with 31 matches as captain, has establshed a record in Twenty20 Internationals, eclipsing Paul Collingwood’s tally of 30. (PTI)

England cannot afford to lose Pietersen; ECB has to bury the hatchet and ego