New Zealand batsman Hamish Rutherford may get to play his first game in over four years after he was summoned to replace the injured Martin Guptill for the third and final Twenty20 International against Sri Lanka.

Rutherford, who last played last played for New Zealand in a Test against Sri Lanka in January 2015, currently with Worcestershire, will be a like for like replacement for Guptill, who suffered an abdominal strain while fielding and didn’t open the batting in the second T20I.

According to a statement by BlackCaps on Wednesday, Guptill will return home to New Zealand for further assessment.

Meanwhile, Tom Bruce, who scored a half-century in the second match, is also in doubt for the third match after tweaking his right knee. 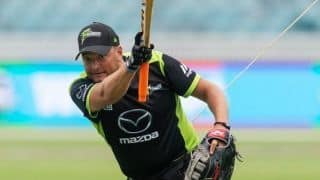