With the building of another all-round show against Sri Lanka, Pakistan have clinched the One-Day International (ODI) series 3-1. After the bowlers and fielders fought hard to choke the runs, knocks from Ahmed Shehzad and Mohammad Hafeez, and finishing touches from Shoaib Malik helped them get over the line, chasing 257 in the 41st over. Shehzad’s 95 was sparkled with 12 fours and a six in his 90-ball 95, with most of them scorching square or extra cover drives, and fierce cuts. Hafeez was impressive in his half-century too, as he continued his prolific form in the series. The left-arm spinner Sachith Pathirana was the most severely hit, among the bowlers in the attack, with 81 runs taken from his ten overs. The target was reached with a six, the fourth of Malik’s short stay at the crease, to signify the ease and strength of his team on the day. UPDATES: Sri Lanka vs Pakistan, 4th ODI, Colombo

Batting first, Sri Lanka lost opener Kusal Perera off the second ball of the match, with a catch at cover. Although a century stand, between Lahiru Thirimanne, who scored a responsible 90, and Tillakaratne Dilshan, took them to a relatively stable base from which to explode with big hits at the death, the momentum was broken with Dilshan’s wicket in the 23rd over. The captain Angelo Mathews and Dinesh Chandimal attempted to prove decent partners to a set Thirimanne, they could never get going, as both departed trying to accelerate, for 12 and 20 respectively. With Sri Lanka not having reached 200 by the 40th over, the wicket of Thirimanne, who was caught at deep fine leg off a dive by Shehzad, the base for acceleration seemed to weaken. Milinda Siriwardana and Lasith Malinga struck a few crucial blows to get their team past 250, but as it turned out, it was too little too late.

The Pakistan openers began briskly, striking a few fours in the gaps in the off side due to the powerplay. Azhar Ali, the captain, departed in a careless manner, caught at third man after 75 were taken in 11.1 overs. But Shehzad and Hafeez consolidated, and negotiated a four-over phase of slow scoring that had Hafeez consuming a lot of deliveries before he could hit his first boundary. But the spell was broken by a gentle but clinical drive from Hafeez for four through extra cover. The two struck a century stand (115) before Shehzad failed to resist trying to steer a short ball outside off to the third man boundary. The man positioned there, Perera, took a tumbling catch to have the batsman falling five short of what would have been his seventh century. SCORECARD: Sri Lanka vs Pakistan, 4th ODI, Colombo

Hafeez reached his own milestone, a half-century, his third fifty-plus score in the series, but perished running down the track to Siriwardana, and managing a tickle to the wicketkeeper Chandimal, who fumbled before pouching it. But by then, the 37th over, Pakistan had already scored 213. Sarfraz Ahmed took a few singles, but Malik expressed his intent to finish the contest at the earliest by stepping down the track to club his sixes. One of them had him almost caught at the boundary. A six to seal the series, was a symbolic gesture of an ideal Eid gift for his countrymen, which Azhar mentioned at the post-match press conference. Pakistan look to have an invincibility coat around them at the moment.

Man of the Match: Ahmed Shehzad 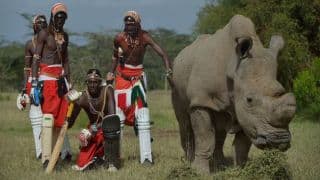 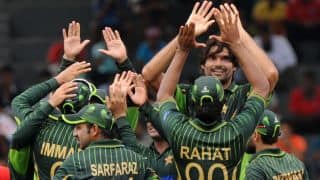