Sri Lanka started the morning session of Day 3 of 1st Test vs Pakistan at Galle carefully. Kaushal Silva who was not out on day two reached his half century. Kumar Sangakkara is also batting aggressively. He is also nearing his half century in the 45th over.

Meanwhile in day two, Younis Khan slammed his 24th century in Test cricket as Pakistan recovered from a shaky start to post a total of at stumps, against Sri Lanka in the opening Test match of their two-match series at Galle on Wednesday. The lower order continued to frustrate the Sri Lankan bowlers later in the day till they posted a big total of 451.

Sri Lanka came out to bat in the post tea session and lost their opener Upul Tharanga. The veteran Kumar Sangakkara and Kaushal Silva who was the other opener is still at the crease and looks quiet solid in their approach. Their were plenty of chances created but these two got the better of the Pakistani bowlers till the stumps on Day 2 on Thursday. Sri lanka would like to keep their scoreboard ticking. 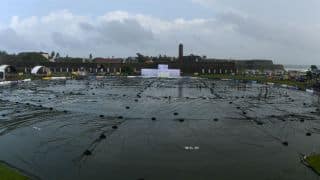