Catch the Live Updates of Day three of Sri Lanka vs Pakistan here.

And its stumps on Day 3. It has been an entertaining day of cricket for all of us, with Rangana Herath picking a record nine-wicket haul, Sarfraz Ahmed scoring his maiden Test century, Sangakkara moving past Brian Lara in the list of highest run-getters in Test cricket and Jayawardene walking down the pavilion one last time. The hosts are in complete control at the moment and will look to carry their momentum over to the next day and the fans at SSC will hope to see Jayawardene post a century in his final Test innings.

That’s all from us. This is Amit Banerjee signing off for the day. Do come back to the same place tomorrow for the live coverage of the fourth day tomorrow. Cheers!

Sangakkara brings up his 51st Test half-century as Jayawardene’s century and the 100-run partnership are a stone’s throw away now. Great display of batting by the two veterans as the Lankans seek gain complete control of the match.

With the close of play on Day 3 just a few minutes away, Jayawardene and Sangakkara will be looking to preserve their wicket for the next day and will definitely aim for a big score and break some records in the process. The duo have now added 75 runs for the third wicket and Jayawardene is nine runs away from 50th Test half-century. The Pakistani bowlers look tired at the moment and will be more than satisfied when the umpires take the bails off.

With not much time left for the declaration of stumps on Day 3, the famed pair of Jayawardene and Sangakkara will hope to extend their 61-run third wicket-stand to a century, which would be a fitting farewell to both.

Sangakkara and Jayawardene add 50 runs for the third wicket, this being the 46th time the pair have added a 50-plus partnership in 121 innings together. The duo hold the record of the highest partnership for any wicket (624) and they became the second-most successful pair in Test history by moving past Desmond Haynes and Gordon Greenidge’s record of 6482 runs.

Sangakkara and Jayawardene officially are the second most successful pair in Test cricket with 6483 runs between them. The Sri Lankan veterans moved past the famed West Indian pair of Desmond Haynes and Gordon Greenidge. This record gets broken minutes after Kumar Sangakkara moves past Brian Lara’s Test run-tally. Sangakkara and Jayawardene are considered to be one of the greatest pairs in cricket history, having the record of the highest partnership for any wicket in Test cricket when they added 624 runs for the 3rd wicket against South Africa incidentally at the same venue.

Sangakkara smashes a Ajmal down fine leg to reach the score of 26 runs and move past Brian Lara’s Test run-tally of 11,953 runs. The stylish left-handed wicket-keeper batsman is now the fifth highest run-getter in Tests and is 45 runs away from reaching the 12,000 career run mark. Jayawardene on the other hand is taking is time as he has scored only four runs from 20 deliveries.

The umpires call for Tea as the legendary pair of Kumar Sangakkara and Mahela Jayawardene are at the crease with the responsibility of scoring a majority of the runs. Play will resume in 20 minutes

Silva’s slow paced knock comes to an end as he dances down the track in an attempt to slog and only manages to edge the ball past the wicket-keeper’s glove to Younis Khan at the first slip. In comes Mahela Jayawardene one last time in whites!! What a rousing reception the stalwart recieves as the  he walks down the pavilion.

Pakistan finally get much-needed first blood as an in-form Tharanga plays a low delivery onto his stumps while attempting to pull it towards mid-wicket. Tharanga misses his half-century by a mere 5 runs, while the visitors will look to prevent any further partnerships from forming at this point. In comes the veteran Kumar Sangakkara, who has a couple of milestones to achieve in this innings.

And the opening stand reaches the 50-run mark. Tharanga and Silva have so far succeeded in providing a good start and will be looking to carry the momentum forward by aiming for a century stand next. The spinners have failed to utilise the turning conditions to get a dismissal so far and have to get into the act if they are to prevent the match from running away from their hands.

The partnership has almost touched the 50-run mark and the runs have mostly flowed from Upul Tharanga’s bat, who has scored 80 percent of the runs so far including four boundaries while Silva is moving at a steady pace of 9 runs from 43 balls at a strike rate of barely two.

The early introduction of the spinners hasn’t wielded any results so far though it is too early to come to any conclusions as yet. The openers look settled by now and will look to attack the Pakistani attack shortly.

Tharanga is starting to get the flow by hitting two boundaries off lef-arm pacer Wahab Riaz already. Misbah-ul-Haq will now opt for Saeed Ajmal, who will be aiming to utilise the turning track to bamboozle the in-form openers.

The hosts walk out to bat after conceding a 12-run lead to Pakistan at Lunch. The openers will be expected to fire like they did in the first innings. This will also be Mahela Jayawardene’s last Test innings, should he get to bat. Skies slightly overcast and there are chances of rain as the ground staff keep the covers ready. Wahab Riaz to open the bowling as Junaid Khan has been hospitalised following a nasty blow he recieved on his helmet off a Dhammika Prasad bouncer.

And nine wickets it is for Rangan Herath! He is now the first ever left-arm bowler to pick nine wickets in an innings and the second Sri Lankan bowler to reach the magical figure! End of Pakistan’s innings and the visitors now have a narrow lead of 12 runs. What a topsy-turvy contest it has been so far! And it is Lunch on Day 3

Herath now picks his career-best figures of eight wickets for 121 runs by removing the centurion Sarfraz Ahmed. What an innings by the Pakistan wicket-keeper! Tries to play a beautifully-pitched delivery towards the covers but only manages to edge it to the Lankan keeper Dickwella. Standing ovation for the man who rescued Pakistan from the dire straits. Herath is just one wicket-away from becoming the first left-arm bowler to pick nine wickets in an innings.

And Sarfraz brings up his much-awaited maiden ton. What a brilliant innings by the young lad from Karachi. Walked in to bat when Pakistan were trailing at 140/5 and has guided them all the way to a mere 9 runs short of the Sri Lankan total. Smashes the first ball off Welegedera for a four and the very next one for a six to bring up the landmark figure in T20 style. First Pakistan wicket-keeper to score a century in five years. Will be an interesting contest between Herath and Sarfraz now.

Herath finally reached the 7-wicket mark for the third time in his 15-year Test career. Removes Riaz, who was starting to get settled and look dangerous. Riaz attempts a sweep off Herath and doesn’t get the ideal connect. Welegedera collects it at deep-backward square leg.

Rangana Herath has been taken off the attack for now in a surprising move by Angelo Mathews and has been replaced by Chanaka Welegedera instead. Sarfraz in the meantime has crossed his previous best innings score of 74 against the same opponents in Dubai earlier this year and is looking set to reach his maiden century, which is now a mere 16 runs away.

Herath strikes again and this time picks his sixth wicket of the innings and the first of the day. Abdur Rehman was starting to open up against the spin, having smashed the previous delivery over mid-off for a four. The blossoming partnership has finally come to an end and Sarfraz on one end is fast losing support. Rehman edges the full-pitched delivery towards the slips and Mahela’s superb reflexes completes the job.

Abdur Rehman has finally started to hit a few strokes. Played a fine leg glance off the bowling of Dhammika Prasad to bring up the first boundary of the day. Sarfraz in the meantime is 28 runs away from bringing up his first international Test century.

Sarfraz and Abdur walk out to bat on the third day of the second and final Test. Sarfraz carries the hopes of the Pakistani team at the moment and will have to play extremely cautiously if he is to lead his side to a lead against Sri Lanka. Rangana Herath on the other hand will open the bowling for the hosts and will be looking for some early strikes.

Hello and welcome to Day 3 of the 2nd Test between Pakistan and Sri Lanka at Colombo (SSC). Mahela Jayawardene’s farewell Test has witnessed quite a bit of drama. Pakistan reached 244 for the loss of six wickets after 70 overs at the end of play on the second day of the final Test against Sri Lanka at Sinhalese Sports Club at Colombo. Sarfraz Ahmed and Abdur Rehman were at the crease batting at 66 and and 1 respectively. Rangana Herathemerged the pick of the bowlers once again with figures of five for 98.

The start of the Pakistani innings saw Mahela Jayawardene get a Guard-of-Honour at the venue which has been a happy hunting ground for him, having scored 11 out of 34 Test centuries. Pakistan got off to a good start as they started attacking from the word go. Herath was the first to strike for the Lankans. The ball kept crossing the boundary line regularly and Angelo Mathewswas left looking at further options in spite of introducing star spinner Herath in the fifth over itself. Hi I am Amit Banerjee and I will be bringing you updates of the match. 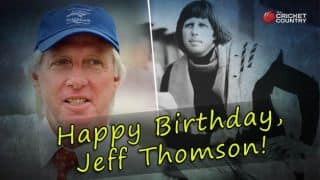