Sri Lanka need a win to stay alive in the three-match series.

South Africa are 1-0 up against hosts Sri Lanka in the three-match series after winning the first game at the R Premadasa Stadium in Colombo on July 6. Sri Lanka will have to recover from the loss very quickly in order to win the match and take the contest into the final match.

It was the Hashim Amla show in the first game, as the Test skipper scored an elegant century to propel the Proteas to 304 in their 50 overs. AB de Villiers and David Miller looked in great form as well, which bodes very well for the visitors. On the bowling front, Imran Tahir took three wickets, but went at over seven runs an over. It was a complete team performance for South Africa. They would love a repeat of their effort in a bid to pull off their first ever ODI series win in Sri Lanka.

Hosts Sri Lanka will be jolted by the defeat, considering that they have been in excellent form in 2014. They are yet to lose a series in any format this year. However, they will need to pull up their socks if they have any hope of finishing ahead in this series. In the first game, Kumar Sangakkara scored a typically stylish 88, but kept running out of partners. He has been their best batsman for quite some time now, and has been almost unstoppable in 2014. He will not be able to rescue the team every time, though, and will need the support of some of the other batsmen to help Sri Lanka score big.

Ryan McLaren put in a good all-round performance for South Africa, scoring some useful runs down the order and also taking a couple of wickets. He, along with Dale Steyn, Vernon Philander, and Morne Morkel form a very intimidating line-up of pacers, and if there is any assistance for them at Pallekele, they are likely to make life very tough for the Lankan batsmen.

For Sri Lanka, Lasith Malinga had a rare off day, going wicketless and also conceding over seven runs an over. He will be keen to correct those figures by snaring a few wickets and bowling a miserly spell or two. Sachithra Senanayake and Ajantha Mendis were both effective in the first match, and would like to continue in similar vein again.

Pallekele is traditionally a good pitch for batting. Tillakaratne Dilshan especially has an affinity for the ground. He has scored 682 runs in 10 games at a stupendous average of 97.42, a strike rate of 92.78, and five centuries. On the bowling front, Malinga has taken 15 wickets in nine games with an average of 26.4 and a strike rate of 30.

Sri Lanka are still favourites, but they must get their act together very quickly if they hope to pull off yet another series victory in 2014. 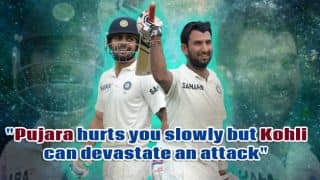