Kumar Sangakkara admitted his knowledge of Canada is confined to ace batsman John Davison, who once scored the fastest World Cup hundred, but that does not bother the Sri Lankan captain. 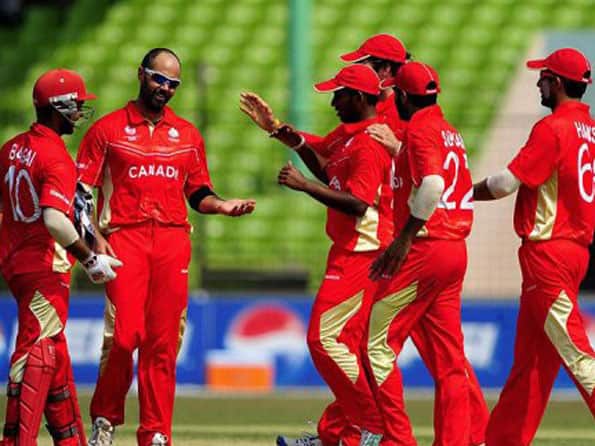 Kumar Sangakkara admitted his knowledge of Canada is confined to ace batsman John Davison,(2ndL), seen here with teammates on February 11, who once scored the fastest World Cup hundred, but that does not bother the Sri Lankan captain.

Kumar Sangakkara admitted his knowledge of Canada is confined to ace batsman John Davison, who once scored the fastest World Cup hundred, but that does not bother the Sri Lankan captain.

He is also unfazed by playing in the Hambantota stadium — venue for the home team’s opening match on Sunday — which is being used for the first time for an international fixture.

“I know Davison, who scored the fastest World Cup hundred and not too much,” said Sangakkara when asked what he knew about his opponents.

“I don’t think when we go to play sides that we haven’t played much that we should worry because in those games it’s all about us, how well we do and how well we play our cricket,” said Sangakkara.

He said Sri Lanka had the firepower to beat Canada, adding: “I think we don’t need to be negative and we must make sure that we beat them without problems.”

Sri Lanka, runners-up in the 2007 World Cup in the Caribbean, go into the tournament in good shape after comfortable wins in their two warm-up matches. All of the side’s batsmen — except for Mahela Jayawardene — had good workouts in the build-up and are likely to relish the inexperienced Canadian bowling attack.

Lasith Malinga, Nuwan Kulasekara and Angelo Mathews will lead the pace attack but Muttiah Muralitharan’s off-spin is likely to cause the most problems for the Canadian batsmen. The leading wicket-taker in one-day internationals, Muralitharan, with 519 wickets in 341 matches, has fully recovered from knee problems.

Canadian captain Ashish Bagai admitted his team faces a big challenge. “Obviously Muralitharan and Malinga are the big threats but if we can get through a couple of their bowlers we have a good chance,” said Bagai, who also played down the issue of the new venue.

“It is a new venue, even they won’t know what to expect, so it’s going to be tough for both the team,” said Bagai of the ground, built at a cost of nearly $8 million.

Consistent rain has given little time for the pitch to settle down but it is likely to help slow bowlers.

Besides Bagai and Davison, Rizwan Cheema and Sri Lankan-born Ruvindu Gunasekera lead the batting in the 15-man squad, which includes players born in India, Pakistan and Uganda among other nations. But whether Davison, who initially walked away from the squad because two experienced players were excluded, can find his top form at the age of 40 remains to be seen.

The two countries have only met once before, with Sri Lanka mauling Canada, dismissed for 36 — still the lowest total in a World Cup match — by nine wickets at Paarl in the 2003 World Cup.