Sri Lanka women played a stellar knock each as they helped the Lankans post an average total of 129 against Ireland Women, in the World T20 2016.

Sri Lanka women in the form of Chamari Atapattu, Prasadani Weerakkody and Eshani Lokusuriyage played a stellar knock each as they helped the Lankans post an average total of 129 for the loss of seven wickets, against Ireland Women, in the Super 10 Group A, Match 9 of the ongoing ICC Women’s World T20 2016, at the Punjab Cricket Association (PCA) Stadium in Mohali on Sunday. Ciara Metcalfe claimed four wickets for Ireland. Earlier, Sri Lanka skipper Chamari Atapattu won the coin toss and elected to bat first on the typical batting strip at Bengaluru, as both the teams went in with a strong batting side. LIVE CRICKET UPDATES: Ireland Women vs Sri Lanka Women, Match 9 Group B at Mohali

The Sri Lankans were off to a positive start with the openers in the form of the skipper and Yasoda Mendis, putting up 45-run opening stand, before Mendis fell for mere nine in the sixth over to Ciara Metcalfe, after trapped leg-before by her, followed by the skipper, just a run later in the very same over, for a healthy 34, after being caught by Cicelia Joyce.

At the score of 55, it was their wicketkeeper-batsman Dilani Manodara, who fell for mere six, following an unfortunate run out in the ninth over, followed by the wicket of Oshadi Ranasinghe, for a mere single, after being bowled by Metcalfe in the next over, with just a couple more added to the total, as the over also saw the fall of Harshitha Madavi for an unfortunate duck, after being dismissed by Metcalfe in a similar fashion, with another couple added to the total.

It was suddenly followed by a healthy 49-run stand between Prasadani Weerakkody and Eshani Lokusuriyage, before Weerakkody fell in the 18th over to Lucy O’Reilly, after being bowled by him in the 18th over, followed by Nilakshi de Silva, a couple of over later as the score read 121 for the loss of seven. It was the pair of Lokusuriyage and Udeshika Prabodhani, who batted it out until the end, as they set a target of 130 for the Irish to chase down. 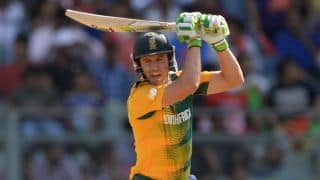