After playing a crucial knock of 47 off 44 in a spectacular run-chase against India, Kusal Perera has been ruled out of the remainder of ICC Champions Trophy 2017 due to hamstring injury. All-rounder Dhananjaya de Silva was renamed Kusal Perera’s replacement ahead of Sri Lanka’s must-win clash against Pakistan on Monday. Dhananjaya has represented Sri Lanka in 16 ODIs, scoring 334 runs at 25.69 with a strike-rate of 75.05. He led Sri Lanka A team earlier this year against England Lions. FULL cricket score: Sri Lanka vs Pakistan, Champions Trophy 2017

Injuries have been scaring Sri Lanka of late. In the absence of captain Angelo Mathews, Sri Lanka lost to South Africa by 96 runs. Later, Chamara Kapugedera picked up a knee injury, and Danushka Gunathilaka was drafted in as his replacement. The change turned out to be a blessing in disguise as Gunathilaka played an anchoring knock of 76 off 72.

Kusal was ruled out after a radiographic Test on Friday, which revealed the extent of his injury. Kusal will now go under rehabilitation. 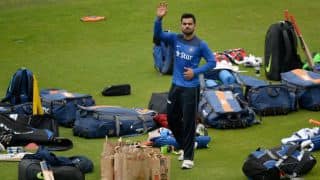