Stafanie Taylor said that the run out of Sophie Devine changed the game as they ended up beating New Zealand in Women's World T20.

Mumbai: West Indies captain Stafanie Taylor said that the run out of Sophie Devine by Deandra Dottin changed the game as they ended up beating New Zealand in the ICC Women’s World T20 semifinal on Thursday. “Anytime Deandra Dottin gets a run out its something spectacular. She is so vibrant in the field and when whenever she gets a run out it brings the whole flame back, the run out changed the game and had us back in it,” she told reporters at the post-match conference. When quizzed whether targeting spinners was part of the gameplan, she said: No it wasn t our game plan, may be it was Britney s (Cooper s) gameplan, it was no time to play their game, it is time to play our game, the way we played them was fantastic. We knew, we had to put up a big total to push NZ back, and 143 was pretty decent.” FULL  CRICKET SCORECARD: New Zealand vs West Indies, Semi-Final 2, ICC Women’s World T20 Cup 2016 at Mumbai

“We played Australia in the semi-finals [in previous World T20s] and now we play them in the final, they are a good and tough team, if we are consistent and play it like today, and bowl well against them we fancy our chance.  She said the men s team supported their team and captain Darren Sammy wished the team for the match. The captain said Anisa Mohammed did start off as planned and it forced her to come back early on which worked.” When asked whether she was thinking about a hat-trick after dismissing two set Kiwi batswomen, Taylor replied in negative. 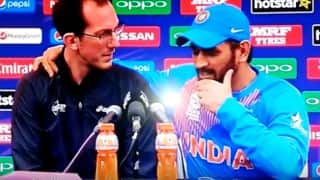