CoA chief Vinod Rai has said the current impasse between the BCCI and state associations over the issue of complimentary tickets could have been avoided.

Committee of Administrators (CoA) chief Vinod Rai has said the current impasse between the BCCI and state associations over the issue of complimentary tickets could have been dealt with had the matter been raised when there was opportunity to discuss them.

On Wednesday, the BCCI shifted the 2nd ODI between India and West Indies from Holkar Stadium in Indore to Vizag after failing to reach a consensus over the distribution of complimentary tickets. As per the new constitution of BCCI, state associations have to put 90 percent tickets of the total seating capacity of their stadiums for public sale. This leaves 10 per cent of the tickets for the state bodies’ perusal.

“Our hands are tied by the Supreme Court order,” Rai was quoted as saying by The Indian Express on Thursday. “This is not our creation. When the opportunity was there to discuss this, first with the Lodha Committee and then before the Supreme Court, they (state associations) didn t (raise the matter). Even now the clarifications (BCCI acting secretary) Amitabh Choudhary and TNCA have asked for (with regard to the certain clauses in the new constitution) don t include this thing.”

Rai said in the eventuality of more associations backing out from hosting matches, they have backup venues ready. “The games have to go on. We can t cut a sorry figure. If some associations decide not to cooperate, we will have to look at alternatives. Back-up venues are there. If they (MPCA) had spoken to the CEO (regarding the Indore match), he would have provided them with the solution. We are always open to discussion. There should be a willingness to work out the solution,” he said.

As per the report, the state associations had a conference call on Tuesday and they are not going to budge on the ticket allocation. Chennai is scheduled to host the third T20I on November 11 and Tamil Nadu Cricket Association (TNCA) will side with Sourav Ganguly in not compromising on tickets.

“We have a meeting of our executive committee tomorrow, but as things stand, the TNCA is committed to life members, patron members etc. We can t agree to 10 per cent. That s impossible for us to conduct. We can t avoid giving tickets to government agencies. We will not compromise on tickets, like Sourav has said. It s up to the BCCI to decide then (if Chennai will host the game), the daily quoted a former TNCA office-bearer as saying. 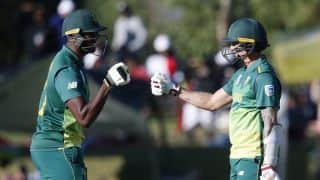