Chennai Super Kings coach Stephen Fleming on Saturday hailed 'Sir' Ravindra Jadeja and said the all-rounder was developing as a big match player after he guided the visitors to a four-wicket win over Kolkata Knight Riders in Indian Premier League match. 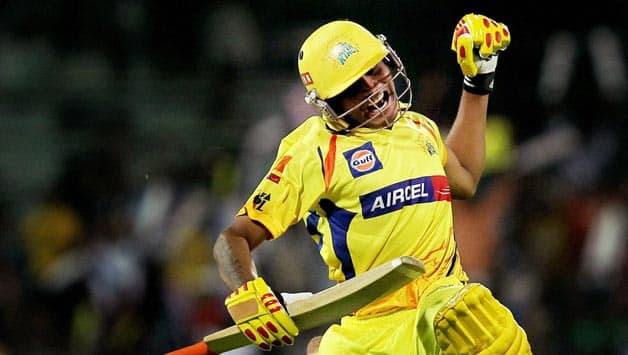 Chennai Super Kings coach Stephen Fleming on Saturday hailed ‘Sir’ Ravindra Jadeja and said the all-rounder was developing as a big match player after he guided the visitors to a four-wicket win over Kolkata Knight Riders in Indian Premier League match.

Jadeja claimed three wickets for 20 with the ball and scored an unbeaten 36 off just 14 deliveries to steer Chennai to the four-wicket win.

“He is really developing, both in the changing room and obviously as a player. He is gaining a lot of confidence, he is becoming more confident with his peers. When you have the Indian captain and some key players that make a big difference within the side. It’s no doubt he turned the match today,” Fleming said in the post-match press conference.

“His English is getting better as well. You might laugh at that but it means he is a bigger part of the dressing room and so he is understanding more of what is going on,” he said in a lighter vein.

“There was a good catch from Hussey and an excellent run-out by Badri. At 49 after seven overs you think it’s going to be a good score. Our fielding came to the fore and made a big difference to the game. We are very proud of that,” Fleming said.

“No doubt that the run outs and the pressure we created helped to keep a good batting line-up down to that score.

Getting Kallis out with was a huge thing. Our fielding was outstanding,” he added.

The Knight Riders had denied Super Kings a hattrick of IPL titles with a victory in the 2012 edition and Fleming said today’s win mattered a lot to them.

“For one, they are the defending champions. This game meant a lot to us so there was a lot of emotional energy as well,” he said.

“Both sides fielded very very well. Just one of those tough games, one where you have to grind it out with a match-winning innings. We created that opportunity and was good enough to get over the line.”

Fleming said they were trying to be innovative by opening with Ravichandran Ashwin.

“We have got a very long batting line-up and he’s got a pretty good record and he is not orthodox,” the coach said.

“We thought if we could break up the spinning pattern, and if Ash (Ashwin) could get a quick 20 or 30, chasing 120 would be a lot easier without main batsmen to come.

“We thought it was worth the risk and the captain’s been pretty keen on it for some time. And the way we batted after that it wasn’t a bad gamble with Ash getting those 10-11 runs,” he said.

“We are giving things a try. We know we have to be innovative. We can’t be reckless but we try to get better. We have a good formula that we can got to but we have to make sure we are using all our resources,” Fleming added.

“We were desperate to play the spinners very well, and maybe a bit conservative. And we lost wickets at key times.

“I don’t think it was an easy wicket to chase down or set a big score. Every time a batsman got out, they got into trouble, plus a bit of pressure with run-outs.”