Steve Davis was promoted to the elite panel in 2008.

Dubai: ICC Elite Panel umpire Steve Davis today announced that he will retire from the international stage at the end of the upcoming ODI series between England and New Zealand, which concludes on June 20. The 63-year-old Davis was selected for the International Panel of ICC Umpires in 2002, before he was promoted to the elite panel in 2008. To date, Davis has umpired in 57 Tests, 135 ODIs and 26 T20Is.

Davis made his first-class umpiring debut in 1990-91 and umpired in his first ODI in 1992 when he officiated an ODI between Pakistan and West Indies in Adelaide. His first Test appointment was five years later in Hobart when he stood in the match between Australia and New Zealand.

Announcing his decision, Davis said: “It has been a difficult but considered decision. I have had a marvellous 25-year career during which I worked with some of the best umpires and match referees. “I have made many lasting friendships all around the world, both on and off the field, which I will treasure forever.

“I also take this opportunity to thank Cricket Australia and the ICC for their support and the opportunities they have given me. And as much as anyone, I thank my wife Annie and our families for their encouragement and support over the years.”

ICC General Manager Cricket, Geoff Allardice, paid tribute to Davis when he said: “Steve will finish international cricket on a high, leaving the game with the respect of not only his umpiring colleagues, but of the match referees and players as well.

“He was one of the best match managers on the field, and a great team man for umpires and referees to work alongside. He has also been the leader of the elite umpires over recent years, and his calming influence will be hard to replace.”

Vince Van Der Bijl, Senior Umpires and Referees Manager, congratulated Davis on a successful career. He said: “The Elite Panel had been fortunate to have a person of Steve’s calibre and stature involved with the group for the last seven years.

“Through his leadership and commitment, Steve has had an immense influence on the umpiring community, which will be fondly remembered by all those who have worked with him during his long and distinguished umpiring career.

“On behalf of the ICC, I thank Steve for his significant contribution to the game.” Davis’ replacement on the Elite Panel of ICC Umpires will be announced in due course. 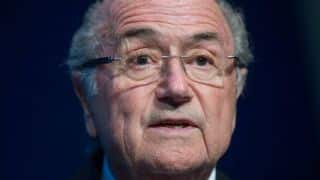