Both Smith and Warner will be playing the IPL 2019, starting March 23, and it is not clear when will they be joining the Australian team in UAE.

Banned Australian duo of Steve Smith and David Warner may not have been considered for selection for the final two ODIs against Pakistan in the five-match series, starting March 22 in the UAE, but the duo will be part of the Australian squad during the tour. (ALSO READ: Starc, Smith and Warner left out of Pakistan ODIs in UAE)

Both Smith and Warner, suspended for 12 months over their roles in the ball-tampering incident at Cape Town in 2018, will be playing the IPL 2019, starting March 23 and it is unclear when will they be joining the Australian team in UAE. (ALSO READ: David Warner sizzles with century on return from surgery)

Their suspension will be over on March 28, and even though there were clamours for their inclusion for the final two ODIs – on March 29 and 31, the National Selection Panel, CA medical staff and Interim EGM Team Performance Belinda Clark believed that their best path back into the national team was through the IPL as both batsmen recover from respective elbow surgeries. (ALSO READ: Warner, Smith will destroy bowling attacks when they return: Shane Warne)

After consultation with members of the National Selection Panel, Greg Chappell and Head Coach Justin Langer, Interim EGM Team Performance Belinda Clark, CA Medical Team and both players, it has been agreed Steve Smith and David Warner will not be available for selection for the final two matches of the series against Pakistan, Trevor Hohns, chief of selectors, had said in a statement last week.

Meanwhile, Australia named an unchanged 15-man squad that travelled to India for the upcoming ODI tour of UAE. Mitchell Starc was expected to make his international comeback in the Pakistan ODIs but misses out due to a recurrence of a left pectoral muscle injury which he picked during the recent home Test series against Sri Lanka, while Kane Richardson, who was ruled out of the ongoing limited-overs tour of India due to a side injury, is also set to return. 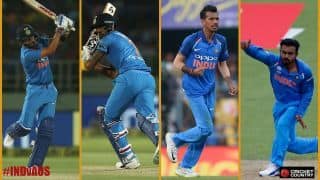 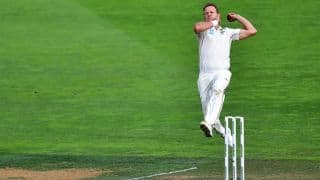