"It should have been sorted in a different way. To me that is demeaning and disrespectful to a player." - Steven Waugh

Many thought Muttiah Muralitharan was the greatest spinner, while there were nonbelievers in his ability opining that he possessed an illegal action. It was not his fault though. He had a deformed arm by default. ICC then dished out a rule, stating that the arm should not exceed 15-degree tolerance limit during the time of delivery. Muralitharan’s action fit the new protocols.

During the 1995-96 Boxing Day Test, umpire Darrell Hair had no-balled him delivery after delivery. Recalling the incident to cricket.com.au, Steve Waugh called the incident as disrespectful to Muralitharan. “I just thought it was a bit unfair. Darrell Hair believed Muralitharan was bowling illegally. It was ugly to see a player (being misjudged) at such a big spectacle. It should have been sorted in a different way. To me that is demeaning and disrespectful to a player.”

Waugh further added that he found Muralitharan’s action legal. “It was just a unique action.”

Speaking to Courier-Mail in 2010, Muralitharan had said that he had forgiven Hair for the mistake. “I have forgiven [Hair] and forgotten. I had been very upset with him, but I have let it go. I am not upset with him. People do make mistakes and I think he made a mistake. My action has been cleared. But I’m not going to look at the past anymore.” 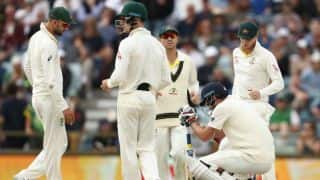