Steve Waugh to captain, Gilchrist over Sangakkara and Tendulkar at No.4 in Jonathan Trott's All-Time XI

Steve Waugh to captain, Gilchrist over Sangakkara and Tendulkar at No.4 in Jonathan Trott's All-Time XI

South Africa-born former England cricketer Jonathan Trott has revealed his All-Time XI. Trott, a successful English cricketer, retired from international cricket in 2015. Though his career was short, it was successful and he played a role in England’s rise to No.1 Test spot.

He has Australian legend Adam Gilchrist coming at No.7, and of course, he is the wicketkeeper too. Moving to his bowling department, the team includes two of the greatest spinners — Shane Warne and Muttiah Muralitharan. On the other hand, his pace battery is pretty lethal as it has Waqar Younis along with ‘White Lightening’ Allan Donald.

Surely, it’s a well-balanced side which is sensibly picked by Trott.

Check out the video where Jonathan Trott reasons it out: 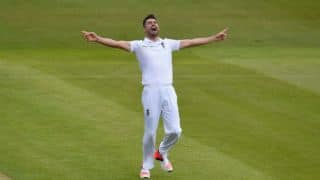 James Anderson to consult with security experts before Bangaldesh tour