Rahul Dravid today said former Australian captain Steve Waugh was his role model and he used to imitate his mannerism to get into the right frame of mind. Rahul Dravid today said former Australian captain Steve Waugh was his role model and he used to imitate his mannerism to get into the right frame of mind.

“I saw in Steve Waugh my roadmap to build my career,” Dravid, who recently retired from international cricket, said at a function organised here by Karnataka State Cricket Association to felicitate him.

Though Waugh didn’t not have an array of strokes like some other batsmen including Sachin Tendulkar and Brian Lara, Dravid said the Australian was a role model who suited his style of game.

Waugh was a gritty player and did not throw away his wicket easily. “He is someone who valued his wicket,” he said.

Dravid said he used to imitate Waugh’s mannerism so as to get into the frame of mind that the Australian was famous for so that it could be easy for him to be in the same state when he walked out in the middle to take guard.

“Steve appeared to relish the big occasion, seemed to thrive in such situations, he added.

Dravid said he did not regret retiring from international cricket. “I have been doing it (playing for India) for over 16 years and five years before I arrived on international scene. I am privileged to be part of cricket,” he said.

Reacting to a commentators remarks to see Dravid occupying his seat next to Kapil Dev for being an all rounder himself, Dravid said he could never fit into the shoes of India’s great all rounder. “I always ask Javagal Srinath how he could bowl fast and bat. It requires special skills,” he said.

“I cannot bowl fast … I could have done anything on a cricket field, but not bowl fast. It was not my cup of tea.”

Asked which sport he loved other than cricket, Dravid said he liked hockey and played as a centre-half. “To be honest, hockey was never a choice… I played hockey for fun.”

On V V S Laxman, Dravid said he was privileged to have had great partnerships with him not only in international, but domestic matches too. “We knew each other very well,” he said.

The speciality of batting with Laxman was, Dravid said, that he never discussed technique with him while playing together. “We only spoke of supporting each other.”

When asked to choose top five batsmen in the world, Dravid said it was a very difficult job. However, Sunil Gavaskar and G R Vishvanath were his childhood heroes. “There were also Vivian Richards, Sachin Tendulkar and others, whom I loved watching,” he said. (PTI) 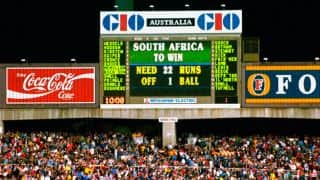 World Cup 1992 semi-final, England vs South Africa: When a fascinating match was ruined by farcical rain-rule