The Australian skipper experienced tightness in the right quad during their previous match against West Indies in St Kitts.

Steven Smith who has missed two training sessions for two consecutive days due to a thigh problem will still play in the next match between Australia and South Africa in the ongoing Tri-Nations Series 2016 at the Caribbean. On Friday, the Australian side had a full two hours fielding session before their main training session on Saturday and Smith was a spectator for both the sessions. The Australian skipper experienced tightness in the right quad during their previous match against West Indies in St Kitts last Tuesday and had his leg strapped by physiotherapist David Beakley during the match. FULL CRICKET SCORECARD: Australia vs South Africa, Match 7, Tri-Nation Series at Barbados

According to cricket.com.au, Smith will surely play in Australia’s next encounter against South Africa. Having lost two games now, Australia must pull up to aim for the making it to the final. Smith who is one of those players who are the last ones to leave the ground at the end of training has missed two consecutive sessions and this is very unusual. Despite having skipped batting in Saturday’s training, Smith is confident of hitting the balls in the nets on Sunday before the encounter against the Proteas.

“I know it’s all precautionary and he’ll be ready to go for Sunday’s clash. I’m sure he’s raring to go and to hit a few cricket balls,” said fast-bowler Mitchell Starc.

With David Warner already ruled out of the series due to a broken finger, Smith’s side-line will only affect Australia’s chances of making it to the final of the Tri-Nation Series. With Warner gone now, Smith along with Aaron Finch, Usman Khawaja and George Bailey will have to carry the batting responsibility; on the other hand, Starc will lead the bowling attack of Travis Head, Josh Hazlewood, Mitchell Marsh and James Faulkner. 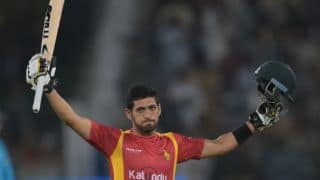