Melbourne: The Australian cricket team paid tribute to Phillip Hughes on his third death anniversary. In memory of their former teammate, the Australian players wore black armbands on the final day of the opening Ashes Test, which was eventually won by the hosts by 10 wickets against England at The Gabba, Brisbane. David Warner looked up at the sky after he reached 63, which was also Hughes’ score when he was fatally hit on the head while during a Sheffield Shield game in 2014.

The Barmy Army also paid their homage There’s only one Phillip Hughes to the tune of Winter Wonderland during the opening session of the fifth day of the match. The Australian cricketers took to their social media handles to pay tribute to Hughes.

Glenn Maxwell tweeted “Big day for @CricketAus to go 1-0 up in the Ashes, 3 years on after Phil passed away. Always in our hearts and minds Hughesy. #RIP #408.”

Mitchell Johnson posted “Miss you bro 408 always with us” – on Twitter.

Miss you bro 408 always with us

Hughes was Australia’s 408th Test cap. He had played 26 Tests, which ended untimely. Peter Siddle also paid his tribute: “This time of the year is always the hardest. We will always miss you brazzy! #408”.

A classy tribute from @TheBarmyArmy on the third anniversary of Phillip Hughes’ tragic death.

Hughes was struck on the back of the neck by a bouncer while batting for the West End Redbacks in a Sheffield Shield match against New South Wales at the Sydney Cricket Ground on November 25, 2014. He passed away two days later as a result of a traumatic basal subarachnoid haemorrhage caused by the blow. He was only 25. 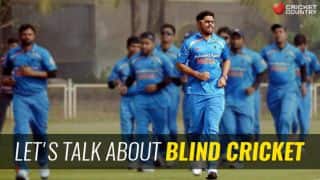