Pakistan paid a heavy price of being erratic on the field, succumbing to a huge 7-wicket defeat against Australia at the WACA, Perth, on Thursday.

Pakistan paid a heavy price of being erratic on the field, succumbing to a huge 7-wicket defeat against Australia at the WACA, Perth, on Thursday. On the third ball of the 11th over, Junaid Khan found an edge off debutant Peter Handscomb s bat, taken by the second slip. However, it was a huge no-ball. In his next over, Junaid had Steven Smith caught behind when he was on 3. There was a genuine edge; Pakistan even believed they had the wicket. But they did not use DRS. Handscomb went on to hammer 84-ball 82; Smith scored his 8th ODI hundred. They added 183 for the third wicket, and guided Australia to 2-1 series lead.

The visitors entered the third ODI at WACA on the back of an impressive win in the second game at Melbourne. The WACA ground in Perth had a lot for them to draw confidence from Pakistan had won 4 out of their 6 matches so far. But as Mohammad Hafeez was indifferent about their record during the toss, perhaps knowing how horribly his team can err. Pakistan were sent in to bat first, they managed 263 for 7 with Babar Azam (84) and Sharjeel Khan (50) making significant contributions.

Smith scored 108 not out off 104 balls, with the help of 11 boundaries and 1 six. On the other hand, Handscomb was unfortunate to have missed out a century on debut, scoring 84 off 82 balls with 6 boundaries. Their stupendous partnership of 183, which outgunned Pakistan from the contest, fell short of the highest third wicket stand of 197 runs between Michael Clarke and Shane Watson, set in Abu Dhabi in 2009.

Australia started off on a poor note once again, losing David Warner and Usman Khawaja early. For the third match in a row, the Australian openers failed to fire and the pressure came entirely on the middle-order. The left-arm Pakistani pair of Mohammad Aamer and Junaid created a lot of troubles as they have done throughout the series. It was Junaid who provided the early breakthrough when he got Warner caught behind for 38-ball 35, studded with 5 boundaries.

Khawaja followed back Warner into the hut soon, edging one behind to the wicketkeeper for a poor 20-ball 9.

Pakistan, with 2 quick wickets, had their chance to capitalise on the situation completely. But they blew it away.

On the third ball of the 11th over, Junaid overstepped the crease and missed out on a chance to dismiss Handscomb when he was on nought.

In the 13th over, Junaid and Pakistan appealed vociferously for a caught-behind against Smith when he was on 3 not out. Pakistan did not opt for the DRS appeal, and the replays showed later on that there was indeed an edge.

Junaid had no luck to make up for the error he had made early on. On the penultimate ball of the 15th over the fielder at point spilled a catch to give Handscomb another lifeline. He blamed sunlight for not being able to spot the ball.

Unfortunately for Pakistan, Australia did not provide any more chance for the remainder of the innings.

Smith and Handscomb plundered runs off every single Pakistani bowler. And if Imad Wasim had any hopes pinned on him, Australia diffused them by hitting 3 boundaries off his first over, accumulating 11 runs.

Australia showed no nervousness in chasing at almost a run-a-ball, and towards the end of their innings, the equation changed drastically that the hosts won with 5 more overs left in their innings.

While Handscomb rode on his luck to come close to a century on debut which eventually did not happen, Smith produced a fine ODI hundred signalling his rich form ahead of the tour of India. Both the batsmen rotated the strike at will with ease, a feature which was missing in the last two innings for Australia.

Earlier in the day, Pakistan gave themselves a good chance to put Australia in pressure after compiling 263 for 7 in their 50 overs. Babar missed a deserving century when he fell for 84 on a decision which looked harsh on the batsman. Handscomb had collected the ball very close to the ground, and third umpire after taking a good look at it deemed it was out. Sharjeel scored 50, whereas Josh Hazlewood claimed 3 for 32 in his 10 overs. 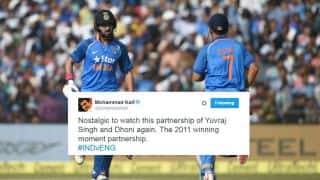