The much talked about shot was hit by Smith in the final ball of the 19th over, when the Australian skipper walked towards the offside and dispatched a boundary towards the leg side

Australian skipper Steven Smith has revealed that he had the read the mind of Wahab Riaz, and known where the bowler will bowl to him during his side’s match against Pakistan in T20 World Cup 2016. Australia beat Pakistan convincingly in the match which meant the latter were knocked out of the tournament. The much talked about shot was hit by Smith in the final ball of the 19th over, when the Australian skipper walked towards the offside and dispatched a boundary towards the leg side. Wahab was criticized for not aiming at the stumps, but Smith believes it wouldn’t have mattered much. ALSO READ: Steven Smith ruled out of IPL 2016 due to wrist injury

Cricket.com.au reported Smith speaking about the shot, saying,”You look at field … (Wahab) was always going to bowl wide. I genuinely think if he had bowled at stumps it would’ve been an easier shot. I could just tell where it was going to go. When you’re in the zone … you can just tell where it’s going to go occasionally. That was one of those instances.”

The Aussie skipper also revealed he that shot wasn’t an one-off, and that he had been practicing it. “That’s something I’ve worked on a little bit in the nets. When the time’s right and the field’s right … you don’t think about doing it, it just sort of happens. Yorkers are hard to get away at the best of times so you’ve got to try and find a place to hit them.” ALSO READ: Steven Smith says he is ready to play day-night Tests; dismisses claims of Australia not being keen

Smith is currently out of action, having suffered an injury midway during the IPL 2016. But he isn’t much concerned about it, saying, “I’ve just got some bruising. I think it’s called a bone edema (swelling within the bone). I’ve always said I want to be 100 per cent fit when I’m playing for Australia so I got myself back here and a bit of rest is doing it good.”

He also spoke about the success of first ‘Day-Night’ Test last year, but stressed improvements are also needed. “I thought if there was two millimetres less grass (on the pitch) it would’ve been a four-day game instead of a three-day game. The ball still has got a few issues. You need to keep grass on the wicket to keep the ball together, which I don’t particularly like, but we’re trying to work our way though that as much as possible to make sure we keep it going.” 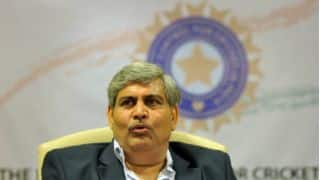