Australia captain Steven Smith faced calls for disciplinary action Wednesday after a row over alleged cheating overshadowed the second Test against India, with his predecessor Michael Clarke accusing him of “unacceptable” behaviour. India’s dramatic, 75-run victory on Tuesday in Bangalore, after Australia crashed to 112 all out, has left the four-match series between the world’s top two sides tantalisingly poised at 1-1. But Wednesday’s headlines were dominated by Indian skipper Virat Kohli’s accusation that Smith abused the decision review system (DRS), after he was seen looking to the Australian dressing-room while considering appealing against his dismissal for lbw. FULL CRICKET SCORECARD: India vs Australia 2nd Test at Bengaluru

The game’s rules forbid players to consult with anyone off the pitch about whether to seek a review from the umpires, particularly as support staff have access to television replays in the dressing-room. At the post-match press conference, Smith who was quickly waved off the field by the umpire admitted he had been at fault, but put it down to a one-off “brain fade”. But an angry Kohli said it wasn’t an isolated incident and “that it’s been happening for the last three days, and it has to stop”. Although Kohli stopped short of accusing Smith of being a cheat, Indian newspapers were less diplomatic. “Smith Caught Cheating,” an Indian Express headline said.

Smith’s explanation was met with widespread sceptism with even Clarke doubting whether it was a one-off, given the non-striker Peter Handscomb seemed to suggest he consult the dressing-room.

“If what Virat Kohli is saying is true and Australia are using their support staff to help them decide on a DRS decision then that’s not on, that’s unacceptable,” Clarke told the India Today network.

“I think Steve Smith respects the game and will always uphold the integrity of the game and if it is just a one-off then it is a brain-fade and he’s made a mistake.

“My concern, my worry is, that when you look at the footage at what happened, Peter Handscomb… actually suggests to Steve Smith to turn around and have a look to the support staff. Now if it is only a one-off, I don’t think that would have happened.”

Although no formal complaint has been lodged with the International Cricket Council (ICC), a source in the Indian board told AFP that the team would press for charges. The record-breaking Indian batsman Sunil Gavaskar said the ICC should punish Smith for a “quite blatant” breach of the rules. Another Indian batting great, VVS Laxman, tweeted that the Australian’s actions were “totally against the spirit of the game”. 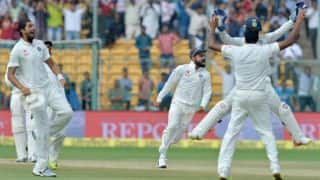 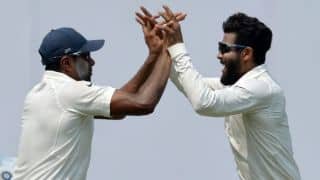