Steven Smith: Will bat at No.4 against New Zealand in first Test at Gabba

Steven Smith: Will bat at No.4 against New Zealand in first Test at Gabba

Australia skipper Steven Smith has confirmed to bat at No.4 in upcoming Test series against New Zealand starting on 5th November.

Australia skipper Steven Smith has made it loud and clear that he will bat at the No.4 position against New Zealand in the first Test at Gabba starting on 5th November. Smith will look to provide the much needed balance to the batting line up after retirements from Michael Clarke, Shane Watson and Chris Rogers. Smith had earlier mentioned about dropping down to No.4 after taking over captaincy from Michael Clarke. Newly drafted Usman Khawaja is likely to bat at number 3 while Joe Burns is expected to open with David Warner, who is coming out an injury lay off. LIVESCORECARD: Australia vs New Zealand , 1st Test match at Gabba

Smith had previous switched his batting position during the Caribbean Tour early this year, he also  scored a wonderful 143 batting at number 3 in the Ashes Test at The Oval in August.Smith averages 71.90 at No.3 in seven Test and 80.00 at No.4, which all were in the 4 Test series against India last year.”I think breaking the more experienced players up a little bit in the order (is the right thing to do),” Smith told News Corp. “(By dropping down to No. 4), if there’s a run of wickets hopefully I can stop it. I think a lot of the players that are coming through at the moment are top order players,”Smith said. ALSO READ: Darren Lehmann: Michael Klinger was nearly called up for first Test against New Zealand

“It’s just the way I see it at the moment. Breaking it up between Davey and myself and hopefully the guys at the top and No. 3 do well and then I can just come in and get some runs on the board as well,” explained Smith. Former Australian greats have spoken about Smith’s batting position but Ian Chappel and Michael Hussey have come out in supporting the debate that Smith should bat at one down in his first ever series as captain. “After the conversation I had with him the other day I suspect he will bat at four which I think will be a mistake,” Chappell said last month. “It’s ridiculous. He’s playing well. Why move? Why put a lesser player ahead of him? “I didn’t want lesser players batting ahead of me unless they were openers,” Chappell mentioned.

Hussey agreed that Smith should bat at No.3 against New Zealand in the first Test no matter what . “I personally like the idea of the best batsman coming in at No.3 and setting the tone,” Hussey said. “Ricky Ponting, he’s someone that did it for Australia, coming in at No.3 and playing nice, positive, aggressive cricket, sending a message to the opposition but also reassuring everybody else in the batting order that it’s not too bad out in the middle,”Hussey said. ALSO READ: Australia not ready for ‘wild experimentation’ against New Zealand in Trans-Tasman Trophy 2015-16

Hussey added, “If it was up to me I’d like Steve to bat three, but there’s a lot that goes into that with the team balance and where he feels most comfortable playing as well.” Last week when Ricky Ponting picked his playing XI for the first Test against New Zealand for cricket.com.au he had put Queensland batsman Usman Khawaja at No.3 ahead of captain Smith. Former Australian great Steve Waugh also endorsed Khawaja to bat at No.3. Smith also mentioned that his move to drop down at No.4 could be a permanent one. Smith says, “One of my philosophies is to make sure I am leading from the front so hopefully I can do that this summer and a summer with the bat like the last one would be nice, so we’ll see how it goes. I think it would probably be more if it doesn’t work out for certain players (that I would change back).”

“If it didn’t work out and I saw it fit to go to three, that’s no drama as well. “I really don’t see a big difference between three and four playing wise,” Smith concluded. 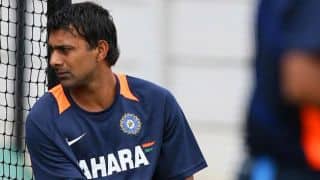 Ranji Trophy 2015-16: Praveen Kumar and Saurabh Kumar pick 5 each as Gujarat gets all out for 100 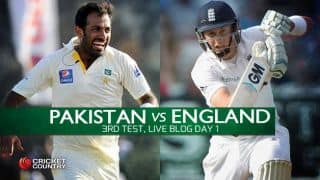