Steven Smith got to his first ever IPL and T20 century which helped RPS accumulate 195 runs for the loss of 3 wickets against Gujarat Lions in IPL 9.

Rising Pune Supergiants were put into bat by Gujarat Lions skipper Suresh Raina after winning the toss at Pune. RPS were looking to avenge their defeat to GL at Rajkot. Australian skipper Steven Smith masterclass (101) rocketed RPS to an imposing total of 195 for 3. Smith got to his first Indian Premier League (IPL) hundred not to forget this was also his first ever Twenty 20 ton as well in just 53 balls. Coming into bat Ajinkya Rahane and his new partner Saurabh Tiwary got off to a bad start as the latter departed just into the third over. Tiwary in an attempt to collect a cheeky single got himself run as Raina ran with all his might and up-rooted the stumps. It was Smith and Rahane who from their stockpiled runs for RPS. Smith and Rahane both constructed a 111 run stand for the second wicket. Live Cricket Scorecard: Rising Pune Supergiants vs Gujarat Lions, IPL 2016, Match 25

Smith was quick to produce his half-century in just 29 balls, hitting five fours and one massive six. Once he got to the land-mark he was unstoppable. Smith was lucky to survive as IPL debutant Shivil Kaushik got his wicket of a no-ball. Smith was on 42* at the time. Rahane was next to notch up his half-century in  43 balls. The Smith -Rahane partnership came to a halting end with Rahane running himself out on 53 as Dwayne Bravo powers the ball to knockout the stumps on the bowler’s end. MS Dhoni came into bat at No.4 were he acted as a spectator to Smith’s brilliance. Live Blog: Rising Pune Supergiants vs Gujarat Lions, IPL 2016, MATCH 25

Dhoni was quick to join the party soon after, as he struck Ravindra Jadeja for two massive sixes in the 17th over of the game. Smith continued to maul bowlers all around the park, which included the willy Dwayne Bravo for a brilliant six over covers in the 18th over. Smith and Dhoni brought up their fifty run stand via a boundary in just 28 balls.  Smith got to his hundred in style smashing his 8th boundary in the very final over, his hundred came in 53 balls. Smith was dismissed the very next ball by Bravo to a perfect yorker. Smith in his innings of 101 hit as many as 8 boundaries and 5 massive sixes. Dhoni remained not-out on 30 off 18 balls with Thisara Perera alongside him batting on 3, giving GL a target of 196 runs to win in 20 overs.

For GL it was  their fielding that did the trick, getting both RPS wickets via moments of individual excellence. Lion’s golden boy Jajeda gave as many as 37 runs in four overs. Kaushik will unlucky not to pick up a wicket, having been taken for runs as he got hammered for 32 runs in the three overs he bowled. Bravo was the only wicket taker for GL but also went for runs in his quota of 4 overs giving away 40 runs in the process. 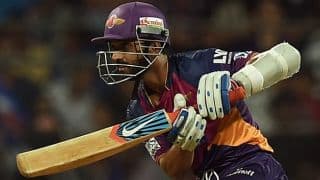 Revealed: What Sachin Tendulkar, MS Dhoni, Virat Kohli and others gifted Ashish Nehra on his birthday