Hughes smashed a record 202 not out for Australia A but was still overlooked for the tour next month.

Australia’s chief selector Rodney Marsh on Tuesday said that all-round skills that Steven Smith have helped him pip the in-form left-handed batsman Phil Hughes for selection in the national squad for One-Day International (ODI) tri-series in Zimbabwe next month. South Africa is the third team in the series.

Hughes smashed a record 202 not out for Australia A but was still overlooked for the tour next month. Despite Smith not having adequate experience in the 50-over format, and having played only two ODIs since July 2012, selectors preferred him due to his all-round skills.

“We’ve asked him [Phil Hughes] to go away and he’s gone away and made runs and he’s still not in. I feel very sorry for Phil because he’s a terrific young bloke and he’s obviously got a lot of skill but on this occasion we wanted to get Steve Smith back in the side,” Marsh was quoted as saying by SEN.

“Steve Smith has been out of the one day side for some time and we see him as a very good all round player. His bowling certainly interests us in the limited form of the game and in fact all forms of the game. And he’s done all that we’ve asked of him in test match cricket and I guess we’ve probably seen that as being the catalyst that’s got him in this side,” Marsh added.

Marsh revealed that the focus of the selectors is majorly on the ICC 2015 World Cup. “Our major focus when we’re talking one day cricket is the cricket World Cup and we are just determined to look at the people we think can play in that World Cup. We’re not saying that the guys that we’ve chosen will all be there, because there are other guys who are just outside this squad who we know about and have used extensively in the past and there are probably a couple more that we’d like to have a look at before we sit down in January and name our squad,” he concluded. 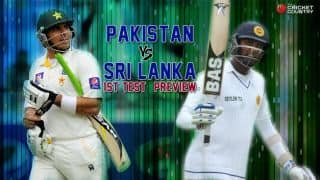