Stiaan van Zyl, who has played 12 Tests for his country, will arrive at Hove next year after completing the domestic campaign with Cape Cobras.

South Africa batsman Stiaan van Zyl has signed a three-year contract with Sussex, the English county announced on Wednesday. The 29-year-old left-hander, who has played 12 Tests for his country, will arrive at Hove next year after completing the domestic campaign with Cape Cobras. Which means he will not play in Test for South Africa anymore. While he averages only 26.33 at Test level, he has registered 8,000 runs and 18 centuries in first-class cricket averaging at 42.55, as well as 52 wickets as a medium-pace bowler. “I am very excited to be joining such a prestigious club as Sussex and can’t wait to be contributing on and off the field, especially with the youngsters coming through,” said Van Zyl. ALSO READ: Stiaan van Zyl: 8 intriguing facts about South African southpaw

“I look forward to scoring plenty of runs and taking plenty of wickets in the new county season and aiming to help Sussex towards silverware next season.” Sussex head coach Mark Davis said: “To have a player of this calibre choosing to play his cricket in England, and committing himself to Sussex, will be a huge boost to the club.” He further added, “We are delighted to have Stiaan joining us at Sussex Cricket. He is an established first-class cricketer of immense talent and has also represented South Africa in 12 Test matches. Stiaan brings a wealth of experience to the team, which is a crucial ingredient to our young developing squad. His medium pace bowling should also not be underestimated.” ALSO READ: Stiaan van Zyl s century on debut earns him a dream start to Test cricket

“To have a top order batsman who is able to bowl seam is a very important element in balancing our team for next season. He is a player who plays all formats of the game, which is another crucial part of our strategy moving forward,” concluded Davis.

Stiaan last played last Test against New Zealand in August this year. His best stance in Test came against West Indies in 2014 where he scored century and since then has been ineffective in this arena. 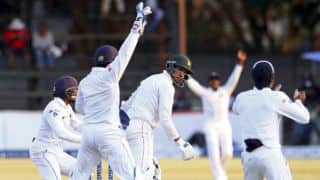