It is being reported that a Pakistani player was hit by a stone near the rope.

Rioting crowds forced cricketers to retreat to their dressing rooms as projectiles reached the outer field of the Premadasa Stadium during the third One-Day International (ODI) between Pakistan and hosts Sri Lanka on Sunday. Police deployed anti-riot squads to clear two blocks of stands near the scoreboard as rival groups of spectators clashed, pelting stones into the grounds from outside the stadium after they were forced out during Sri Lanka’s run chase in the day-night match. The hosts, chasing Pakistan’s 316-4,  were struggling at 158-7 in the 34th over when the disturbances at the grounds in the Sri Lanka capital forced the umpires to order the players to their dressing rooms until the situation was brought under control. Live Updates: Sri Lanka vs Pakistan 2015, 3rd ODI at Colombo

“The umpires decided to suspend play after a player complained that a stone had landed near him,” a police source at the grounds said.  No players were hurt, and the match resumed after a nearly 20 minute delay. There were no immediate reports of arrests. Several vehicles at the stadium were damaged due to stone throwing, however, witnesses said to AFP. Live Scorecard: Sri Lanka vs Pakistan 2015, 3rd ODI at Colombo

Watch the footage of the crowd fight here:

Earlier thanks to a solid display by the Pakistan top order, the visitors have given Sri Lanka a stiff target of 317 to chase in the third One-Day International (ODI) at Colombo. The top six batsmen of Pakistan batting line up were all amongst runs, with Sarfraz Ahmed top scoring with a 74-ball 77. Apart from Sarfraz, Mohammad Hafeez, also scored 54. Skipper Azar Ali, who reached 1,000 ODI runs during the course of this innings, narrowly missed out on his fifty, after being unfortunately run out for 49. 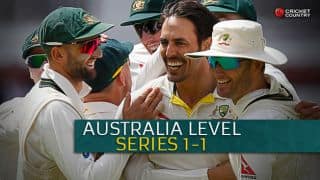