England captain Andrew Strauss has vowed his side "will push on" as they look to build on their stunning series-opening win against Sri Lanka when the second Test starts at Lord's on Friday. 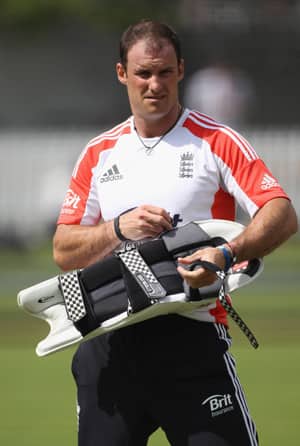 England captain Andrew Strauss has vowed his side “will push on” as they look to build on their stunning series-opening win against Sri Lanka when the second Test starts at Lord’s on Friday. Strauss’s men dismissed the tourists for just 82 inside 25 overs to win a rain-marred first Test by an innings and 14 runs in Cardiff on Monday.

Victory at Lord’s, the Middlesex opening batsman’s home ground, will give England an unbeatable 2-0 lead in the three-match series. But Strauss told England to be wary of a Sri Lanka side still smarting from the embarrassment of such an unlikely loss.

“We’re pretty buoyant after the way we managed to get the victory at the end there in Cardiff but we’re also aware that it’s right back to square one again here at Lord’s,” Strauss told Sky Sports at Lord’s on Thursday, as he reflected on a third straight innings win after Ashes triumphs in Melbourne and Sydney.

“I don’t think any of us want to take our foot off the pedal now. We’ve got to push on and keep challenging ourselves to get better and better. We know that Lord’s generally is a good wicket. You’ve got to fight hard for your wickets and it’s usually five days of very hard work if you want to win a Test match.”

The 34-year-old is anticipating a renewed challenge from Sri Lanka. “You always expect a team to come out fighting. I’m sure they would have been disappointed to be bowled out on that last day and with the quality of players they have they’ll want to prove a point or two, so we’re expecting a pretty strong fightback from them. We’ve got to make sure we’re better,” he said.

Meanwhile, he said England had yet to decide between seamers Steven Finn and Jade Dernbach when it came to taking the place vacated by injured Ashes star James Anderson, even though Finn would be playing on his home ground and Dernbach is uncapped.

“We’re very excited by both. We haven’t seen a lot of Jade but he’s been very impressive both for the Lions and when he’s been amongst the squad. And we all know what Steven Finn can do — he’s been a quality performer for us over the last 12 months. I think we’ve got some good strength in depth and whoever gets the final nod will do a good job, I’m sure.”

Turning to the batting, Strauss praised Jonathan Trott, whose good form continued with a double ton in Cardiff, while insisting runs were around the corner for Kevin Pietersen who once again fell cheaply to a left-arm spinner.

“He’s been a real rock for us at number three — not just the runs he’s scored but the manner in which he scores them,” Strauss said of Trott.

“It’s very low-risk, calms everyone down in the dressing room and it infuriates opposition players, which is great as well.”

As for Pietersen, he added: “We all get asked questions throughout our careers. You’ve got to come up with answers to them. Kevin’s come up with plenty of answers in the past to the challenges he’s been thrown and he’ll do so again.”

If England sweep this series 3-0 they will rise above South Africa and into second place in the International Cricket Council Test rankings. England, who have never been number one, face table-toppers India later in the British summer in a four-match Test series.