Stuart Broad claimed a hat-trick as he led England to a comfortable 46-run win over a New Zealand XI in the visitors' first hit-out of their two-month tour. 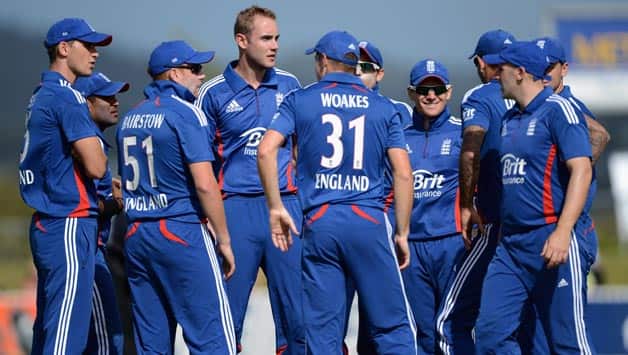 Stuart Broad claimed a hat-trick as he led England to a comfortable 46-run win over a New Zealand XI in the visitors’ first hit-out of their two-month tour.

England made an imposing total of 186 for three after losing the toss and being sent in to bat in the Twenty20 match, with Jos Buttler top-scoring on 57 not out and Eoin Morgan contributing an unbeaten 48.

Broad, the T20 captain for the tour then skittled the New Zealand tail, showing no sign of a heel injury that had sidelined him since November as he dismissed Andy Ellis, Ian Butler and Matt Henry in successive balls.

He was ably supported by Chris Woakes and Jade Dernbach, who each took three wickets apiece and maintained a steady stream of dismissals to prevent the New Zealanders building meaningful partnerships.

Woakes, a late call-up for the tour after Tim Bresnan was ruled with an elbow injury, seized his opportunity, bowling out New Zealand’s openers cheaply, while Dernbach removed Colin Munro as he looked threatening on 55.

Munro received little support as the required run rate climbed steadily higher and the New Zealanders’ resistance crumbled after his dismissal, allowing Broad to mop up.

The sides will play another warm-up at the same venue on Wednesday before the first T20 international in Auckland on Saturday.

BCCI’s activities are all commercial, says IT department

BCCI accuse the IT department of double taxation