Stuart Broad has been in excellent nick with the ball of late.

Stuart Broad has surpassed Fred Trueman to become England’s fourth highest wicket-taker with 308 wickets to his name. Trueman, who played for England between 1952-1965 picked up 307 wickets in 67 matches. Broad picked up eight wickets in the first innings of the fourth Test and Steve Smith became Broad’s 308th victim. Broad now has nine wickets in this match and looks to add more as this match comes to an end. Broad picked up eight wickets in the first innings, which helped England dismiss Australia for just 60 in 18.3 Overs. Broad made his debut against Sri Lanka in 2007 and has been an integral part of the England bowling attack ever since. Live Blog: England vs Australia, 4th Ashes 2015 Test, Day 2

Broad has formed an excellent partnership with James Anderson and the duo have been a force to be reckoned with over the years. Anderson is England’s leading wicket-taker with 413 wickets and is also the first and only English bowler to have more than 400 wickets to his name. Anderson surpassed Ian Botham’s 383 wickets during England’s tour of West Indies earlier this year. Catch live cricket scores and updates of England vs Australia 4th Ashes 2015 Test at Trent Bridge, Day 2 here

England are in a commanding position in the Trent Bridge Test and also lead the series 2-1. A win in this match will seal the series and the urn will return back to England. On Day One, broad had ripped Australia apart after he registered his career best figures of 8 for 15 as the visitors were bowled out for just 60 in 18.3 Overs. England then piled on the runs and ended the day’s play in a commanding position from where they can consolidate on Day Two and that’s what they did. This after England had won the toss on Day One and elected to bowl first. Both teams made a change each. England got fast bowler Wood back in place of James Anderson and Australia got Shaun Marsh into this game in place of Mitchell Marsh. 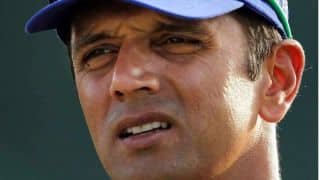