Mitchell Johnson (13) and Australia captain Michael Clarke (10) were the only batsmen to make double figure scores in the innings.

Nottingham: Stuart Broad took eight wickets as England skittled out Australia for 60 in a historically quick 111 balls on the first day of the fourth Ashes Test on Thursday. Fast-medium bowler Broad took eight for 15 in 9.3 overs as he smashed through the 300 test wicket mark in a scintillating performance at Trent Bridge. Broad said the performance had been “unbelievable”. Australia‘s innings was wrapped up in just 18.3 overs — the quickest any team has ever been bowled out in the first innings of a Test — during a stunning 94 minutes’ play. ALSO READ: Stuart Broad rips Australia apart as visitors are bundled out for 60 on Day 1, 4th Ashes 2015 Test

Australia left-arm quick Mitchell Starc checked England’s progress by taking all three wickets to fall as the hosts reached tea on 99 for three — a lead of 39 runs. Joe Root was 33 not out and Jonny Bairstow two not out in a match where an England victory would give them an unbeatable 3-1 lead in the five-match series and see them regain the Ashes. ALSO READ: Ashes 2015: Stuart Broad enters record books, emulates Ernie Toshack

Cloudy overhead conditions offered some assistance to the bowlers and doubtless prompted Cook’s decision to field first upon winning the toss. But they were not ‘unplayable’. Broad bowled well, maintaining an excellent line and length on his Nottinghamshire home ground. ALSO READ: Alastair Cook set to become 1st England cricketer with 50 Test wins

However, several of his wickets owed much to poor shots by Australia batsmen who again cemented their reputation as ‘flat-track bullies’ unable to cope with sideways movement caused by the seaming ball especially. Eight Australia batsmen were caught in the cordon — all off Broad — and one by wicketkeeper Jos Buttler, with Peter Nevill bowled by Steven Finn.

Mitchell Johnson (13) and Australia captain Michael Clarke (10) were the only batsmen to make double figure scores in the innings. Australia’s total — with extras the top score on 14 — was the lowest by either side in an Ashes innings since England were dismissed for 52 at The Oval in 1948. “It’s pretty unbelievable. It’s not sunk in,” Broad told Sky Sports during the innings break after drawing level with England great Fred Trueman’s career tally of 307 Test wickets.

“We knew Trent Bridge would offer us something but we had to bowl well and take our catches.” The 29-year-old Broad, leading the attack in the absence of the injured James Anderson — England’s all-time leading wicket-taker — needed just three balls in Thursday’s first over to take his 300th Test wicket when opener Chris Rogers, on nought, edged to Cook at first slip.  It was the first duck of Rogers’s 46-innings career in Test cricket.

Three balls after becoming just the fifth England bowler after Anderson, Ian Botham, Bob Willis and Trueman to take 300 Test wickets, Broad struck again when Steven Smith, aiming legside, was held by Root at third slip for six. Durham quick Mark Wood, in for Anderson, needed just two balls to take his lone wicket of the innings when David Warner was caught by Buttler off the inside edge.

Left-handers Rogers and Wood became the first Australia openers to both fall for ducks in an Ashes Test innings since Arthur Morris and Jack Moroney at Brisbane in 1950.  Top-order batsman Shaun Marsh, brought in to replace dropped younger brother Mitchell, then fell for a duck when he was caught in the slips by Bell off Broad. Broad then had Adam Voges (one) brilliantly caught one-handed by diving fifth slip Ben Stokes.

Clarke’s desperate run of form continued when, driving loosely outside off stump against Broad, he was well caught by a leaping Cook at first slip to leave Australia 29 for six.  The 34-year-old Clarke’s exit meant one of the best batsmen of his generation had now managed just 104 runs in seven innings this series. By taking five wickets in 19 balls, Broad surpassed Vernon Philander’s five in 25 balls for South Africa against New Zealand at Cape Town in 2013 as the quickest ‘five for’ at the start of a Test innings.

Broad ended the innings when he had last man Nathan Lyon caught in the cordon by Stokes. Starc reduced England to 34 for two as opener Adam Lyth (14), again out for a low score this series, and Ian Bell (one) both fell cheaply. Cook (43) and Root added 62 for the third wicket before the left-handed opener was lbw to a Starc inswinger. 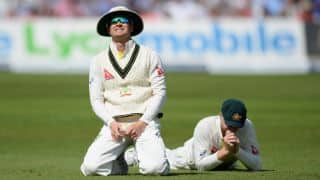