West Indies coach Stuart Law praised his side for the way they responded to their humiliating first Test defeat by England to level the series with a stunning five-wicket win at Headingley on Tuesday.

West Indies coach Stuart Law praised his side for the way they responded to their humiliating first Test defeat by England to level the series with a stunning five-wicket win at Headingley on Tuesday. Shai Hope made hundreds in both innings, with opener Kraigg Brathwaite falling just five runs shy of the same feat, as the West Indies completed a remarkable victory on Tuesday’s fifth day to square the three-Test series at 1-1. The win, West Indies’ first in a Test in England for 17 years, was all the more impressive as just over a week earlier they had been thrashed by an innings and 209 runs inside three days in the series opener at Edgbaston. England vs West Indies series a mismatch, says Stuart Law

“What a five days,” Law told Sky Sports. “After getting the kicking we did at Edgbaston, to get the boys back up to achieve what they’ve done these last five days, it’s a great effort not just by the players themselves but all the support staff. I’m very proud of them, and of the two young guys who scored the runs,” added the former Australia batsman after the West Indies, set a seemingly stiff 322 to win, finished on 322 for five with 28 balls left. The 23-year-old Hope had not scored a hundred in any of his previous 11 Test matches. Yet his 118 not out on Tuesday, following his first-innings 147, saw the Barbados batsman become the first man to score two hundreds in a first-class match in 127 years of cricket at Headingley.

“I said if he gets one (hundred), he’ll get plenty well he got one and he’s got another,” said Law of Hope. He’s been going through the form dip but he’s looked in good nick.”

Law also had words of praise for the 24-year-old Brathwaite, saying: “He’s not the most fashionable-looking cricketer but he gets the job done and he’s one of my first picks every game. (He’s got) plenty of courage, plenty of character and plenty of determination.”

Meanwhile a delighted Hope said: “We needed someone to stand up and bat and I was sure if I was there at the end, the century would come.

“I’m elated, we’ve been working really hard as a team,” he added. Brathwaite and Hope put on 144 on Tuesday following their first-innings partnership of 246, when Brathwaite made 134. England captain Joe Root was left to lament the hosts’ below-par first-innings 258 on his Yorkshire home ground.

“(Hope) played exceptionally well on the fifth day, against high-quality bowling, it was a great knock,” said Root, whose two fifties in the match were eclipsed by Brathwaite and Hope.

“Credit to the whole side, the way they came back from last week was a great effort.

“They put us under pressure in the first innings and then went past us (to make 427).

“If you’re being brutally honest, that’s where we could have been better. Any time you don’t get 300 having won the toss and batted, you’re disappointed.” 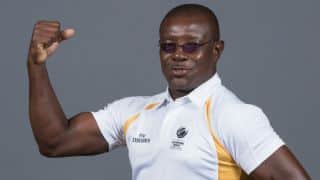