Kumar Sangakkara will retire from international cricket after the second Test between India and Sri Lanka.

Former India skipper Sunil Gavaskar feels the Test series between India and Sri Lanka will provide the visitors a chance to improve their overseas record but Kumar Sangakkara, who will retire after the second Test, is likely to be under pressure. “The three-Test series with Sri Lanka gives the Indian team the chance to improve its overseas record which has been quite ordinary to put it mildly. Sri Lanka have never been easy to beat, especially at home, and though the Indian team has done exceedingly well in limited overs competitions against the Lankans, they do not have as good a record in the Test format against the men from the Emerald Isle.” Kumar Sangakkara: India have lots of talented cricketers

“The series, of course, will more likely be remembered as the swan song of Kumar Sangakkara, who will retire after the second Test match. This is a bit strange since it actually means leaving the series midway, which is never easy for the rest of the team or the selectors but Sangakkara had made it known way back, so he cannot be faulted for it.” VIDEO: Rohit Sharma’s out-of-the-world catch

Writing in his column for Times of India, Gavaskar remembered the time when Muttiah Muralitharan decided to retire after the first Test against India. “Even the great Muttiah Muralitharan had announced that the first Test of the series against India some years back would be his last Test. He was eight wickets short of getting to 800 wickets in Test cricket then and the worry for the Lankans was that he could be left stranded on 799 wickets at the end of the Test. Murali being the magician that he is, ensured that he picked the final wicket of the Test to not only get his 800th victim but also to lead the Lankans to a memorable win.” READ: Kumar Sangakkara’s chances of fairytale ending seem bleak

“Today, the Lankans do not have that same potent spin threat, though in Rangana Herath they have a canny left-armer who can exploit turn in the pitch to his advantage. The talk going into the series is not only about Sangakkara’s retirement but also whether he will be able to equal or even pass Sir Don’s record of most double centuries in Test cricket. ‘Sanga’ is one short of that mark and if he gets there one can safely say that India will be in trouble – perhaps not in the sense of losing the game but certainly not being in a position to win it.” READ: Milestones and records to aim for Kumar Sangakkara in his last series before retirement

“The pressure of expectations can get to the best of men and international sport is brutal when it comes to fairytale goodbyes. They seldom happen, especially if it is known that there will be no more after a particular game. That’s why it is better to leave without previous intimation so that one can play without the additional pressure of everybody’s expectations and the emotion that is attached to knowing that this is going to be the final game.”

“If Sangakkara is going to feel the pressure of expectation, Kohli has an equally heavy burden to bear. The way the last few days have panned out, he is being looked at as a messiah under whom India is going to win every Test it plays. To win, however, a skipper needs a bowling attack that can take 20 wickets,” Gavaskar concluded. 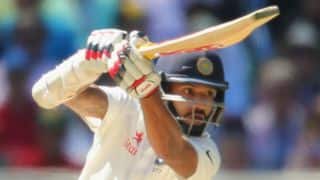